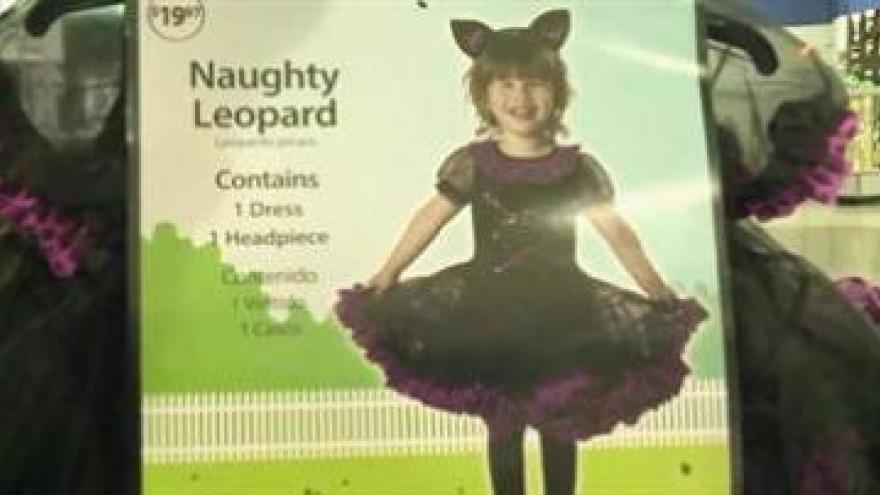 MISHAWAKA, Ind. -- A Halloween costume is causing quite the controversy. It's called the "Naughty Leopard" and is sold at WalMarts here in Michiana.

"I want to be a Lego person," says ten-year old Erin Farmer.

Lego people, princesses, Batman, Superman, pumpkins, WalMart has over 500 different costumes for people of all ages, but one costume stands out over all the rest this year.

ABC 57 stopped in at WalMart in Mishawaka and purchased a costume labeled specifically for toddlers called "Naughty Leopard."

"It doesn't make any sense, I really just think 'Naughty Leopard' is not a good name for a toddler's costume," says Erin.

Many parents across Michiana agree with little ten-year old Erin.

"It's inappropriate," says mother of two young girls, Crystal Miller. "They should not be suggesting to little girls especially that young of an age, that that is appropriate for Halloween."

"'Naughty Leopard' for a child, that young, doesn't seem to fit, I would not be comfortable buying that for my kid," says Holly Farmer, South Bend mother. "I think Halloween is supposed to be fun but it is important to me the messages we send them."

The most surprising reaction was not from parents. ABC 57 also went out and asked teenage girls what they thought of the costume and they are not happy with it either.

"I wouldn't wear something that says 'naughty' in the title so it makes me think why would someone make that for a little child?" says 14-year old Lauren Pontius.

So how could a costume like this end up on the shelves of a big chain of stores like WalMart?

ABC 57 went to a local costume shop called Fun F-X in Mishawaka and talked with the owner about how these outfits are picked. He had some simple advice:

No matter who ABC 57 talked to about this costume, whether they are ten years old or over forty, everyone had the same answer.

"Never for my daughter, never," says Andrew of Mishawaka.

ABC 57 did speak to WalMart about the costume and they gave a statement regarding the costume's name:

"It is never our intention to offend anyone and we apologize to any customers who may have been offended by the name of the costume."