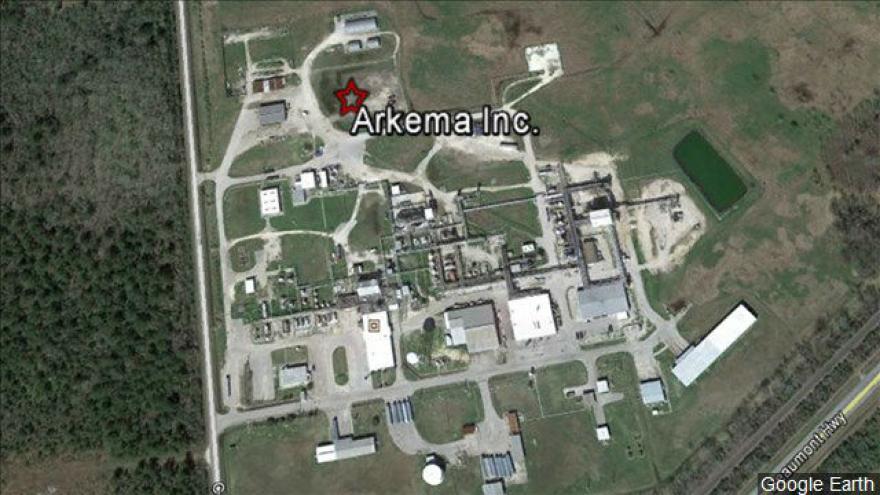 The Superfund sites and the Arkema plant represent just a snapshot of the cascading effects of the catastrophic storm. Photo courtesy Google Earth

(CNN) -- At least 13 toxic waste sites in Texas were flooded or damaged by Hurricane Harvey, adding on to the challenges as the area begins clean up efforts following the deadly storm.

The Environmental Protection Agency announced Saturday that it had assessed 41 Superfund sites using aerial images, and determined the ones badly affected by the storm.

The impact of flooding on the sites is unknown. The EPA said its workers have not been able to "safely access the sites" but are ready to do so as soon as the floodwaters recede.

A Superfund site is land that is contaminated by hazardous waste and identified by the EPA as a candidate for cleanup because it poses a risk to human health and/or the environment. The 13 affected sites have industrial waste from petrochemical companies, acid compounds, solvents and pesticides.

In the Houston area, authorities had said it would take 10-15 days for floodwaters to recede.

The toxic waste sites are not the first environmental threat Texas has faced since Harvey swept through the region.

Fires broke out over two days at a flooded chemical plant near Houston.

People living within 1.5 miles from the Arkema site in Crosby were evacuated days before the explosions and now officials are letting chemical containers catch fire and burn out rather than endanger firefighters, the US Environmental Protection Agency and Texas Commission on Environmental Quality said in a joint statement.

The Superfund sites and the Arkema plant represent just a snapshot of the cascading effects of the catastrophic storm.

Residents were evacuated last week when floodwaters breached a levee in the county south of Houston. Water is going through septic systems in rural areas, creating a health hazard for residents. "It's like a huge lake sliding across the county," he said.

In Houston, nearly 300 people who chose to stay in flooded homes after Hurricane Harvey are expected to evacuate before the CenterPoint Energy utility turns off power to those residences.

Houston's mayor ordered the evacuation after emergency workers scouted the area Friday and learned that many people had not left their flooded homes. Areas of western Houston have seen sustained flooding in part because the Army Corps of Engineers has intentionally released water from two swollen reservoirs -- and the flooding there won't recede soon, Turner said.

Relief supplies and up to 50 Mexican medical professionals will soon cross the border to help thousands of flood evacuees in Texas, Mexican officials said.

More than a dozen trailers loaded with beds, portable generators, mobile community kitchens and other supplies will cross the border into Laredo, Texas "in the coming days," and transported by land to the Houston area.

"On top of everything, there is a deep relationship between Mexico and Texas," Sada said.

In 2005, Mexico sent drinking water and a convoy of soldiers among other supplies to help Hurricane Katrina victims.

As the government works to help those affected by Harvey, Hurricane Irma is looming in the Atlantic as a threat to Caribbean islands -- and potentially, by next week, to the United States.