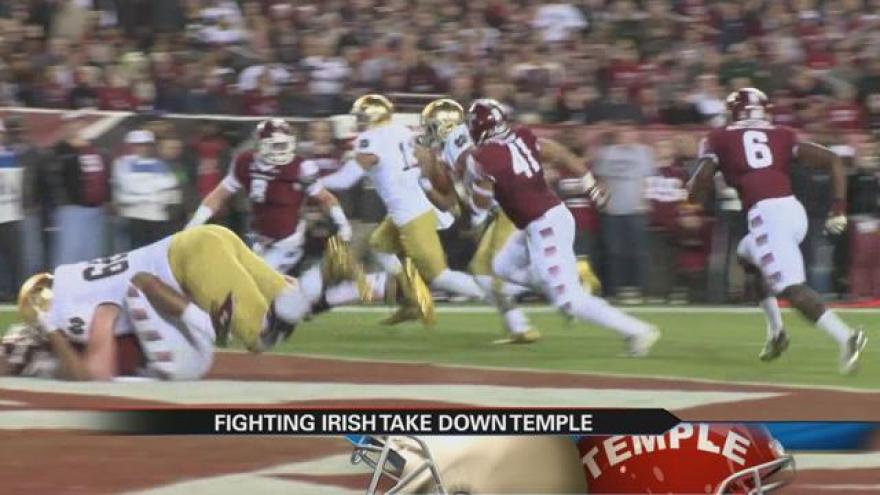 Offensively, he says it was Quarterback DeShone Kizer who got the game ball Saturday night after keeping his poise despite quite a few challenges from Temple.

Notre Dame was the first team to score against Temple on its opening possession this season.

But the Owls were looking to make history with an 8-0 start and didn’t give up without a fight.

“Very good coaching. And they’re a faster football team than they were three years ago across the board,” said Notre Dame Head Coach Brian Kelly.

Penalties like Safety Elijah Shumate’s ejection from a targeting call didn’t help the Irish and neither did a couple of red zone turnovers. But they fought hard in the second half to bring in the win.

“There’s a demeanor on this football team of ‘they’re not going to give in’. They just keep playing. They play hard for four quarters,” said Kelly.

With a fourth quarter touchdown pass to Philly native Will Fuller, DeShone Kizer saved the day for Notre Dame.

“It’s always good to put the ball in his hands and I’m proud to have him as a teammate and I’m glad he got to experience that in front of his family,” said Kizer.

Corner KeiVarae Russell seals the win after he picks off Temple Quarterback P.J. Walker with just a minute on the clock.

The Irish survived another scare with a final score of 24-20 at Lincoln Financial Field. Next week they’ll head to Pittsburgh.