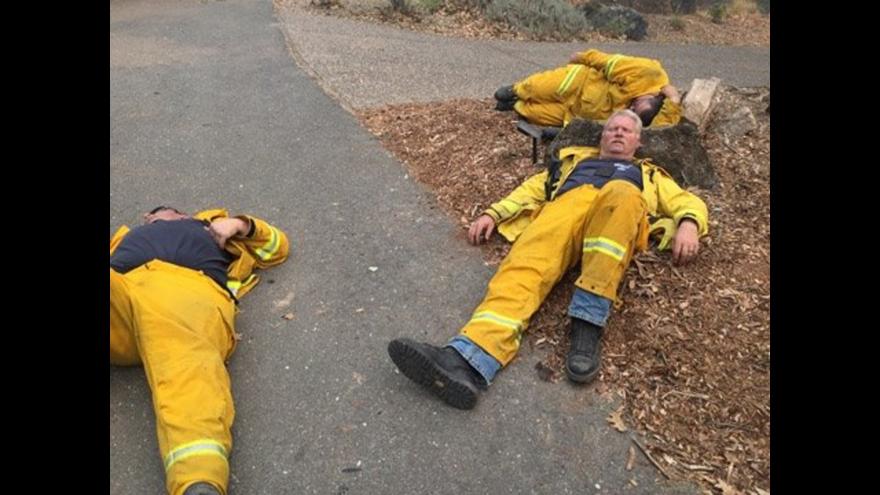 (CNN) -- Firefighters suit up, grab their oxygen tanks, jump on the firetruck without asking questions -- and set off to battle the wildfires burning in Northern California.

In the days since the first fire broke out, heartbreaking images showing firefighters taking a much needed break wherever they can have been circulating on social media.

A group of Sebastopol Fire Department firefighters sought solace on the ground using a rock as a pillow -- just to get a few moments of rest before heading back out to the fireline.

Finally getting a night's sleep

"We have slept off and on throughout the incident in engines, pickups, hose beds, etc.," said firefighter Fred Leuenberger. "There have been few breaks, just enough to get home and check on family."

Leuenberger, an 18-year veteran with Rincon Valley, snapped an image showing his crew eating a pasta dinner someone in the community donated. Their fire station was just 200 yards away from the western edge of the nearest blaze.

"These firefighters have committed to this community," he posted on Instagram. "Despite devastating personal losses, they continue to work day after day with little to no rest."

As Santa Rosa firefighters fought the Tubbs Fire that devastated their community, their own fire station took a direct hit.

Santa Rosa Fire Station No. 5 was just renovated in 2015 and now has to be leveled, according to CNN affiliate KRON. With nowhere to take a proper dinner break, a group of firefighters from the station enjoyed some home cooking on the lawn of Erin Terbush Byrn and Amy Ayers.

This also doubled as family time for firefighter Scott Byrn, in the middle of the group, who got to spend time with his niece and nephew before heading back out to the battle the fires.