The system starts to move in late this evening, becoming widespread tonight. Right now, it looks like we will see more rain than snow as the rain lasts through Saturday morning. Very high rainfall totals bring a threat of flooding. Temperatures drop Saturday, turning the rain to freezing rain, sleet and then wet snow.

Track of the System 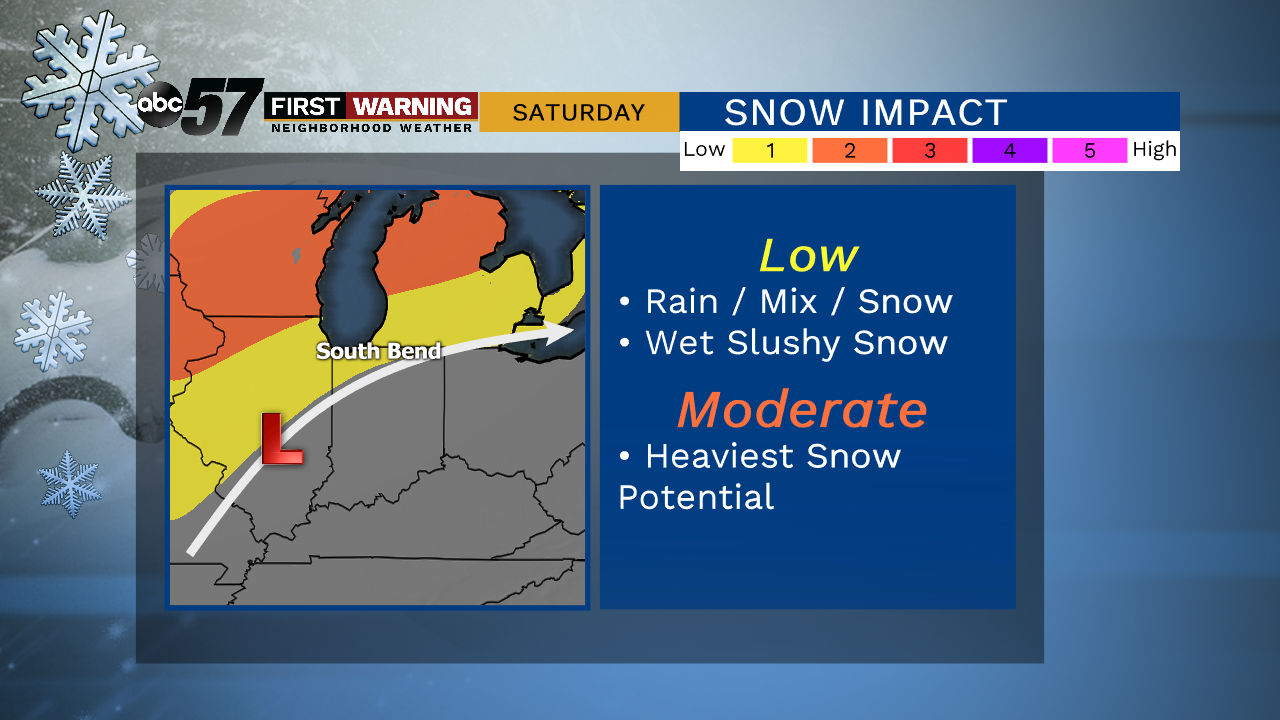 The system is tracking further north, bringing us a majority of the rainfall. The snow looks to be the heaviest in Iowa, Wisconsin and northern Michigan.

The heaviest rain is expected to start Friday night. This system is pulling a lot of moisture north as it taps into the moisture over the Gulf of Mexico. Ahead of the system moving in, a Flood Watch has been issued for all of Michiana. The confidence is continuing to grow that this system will primarily be a rain impact than snow. 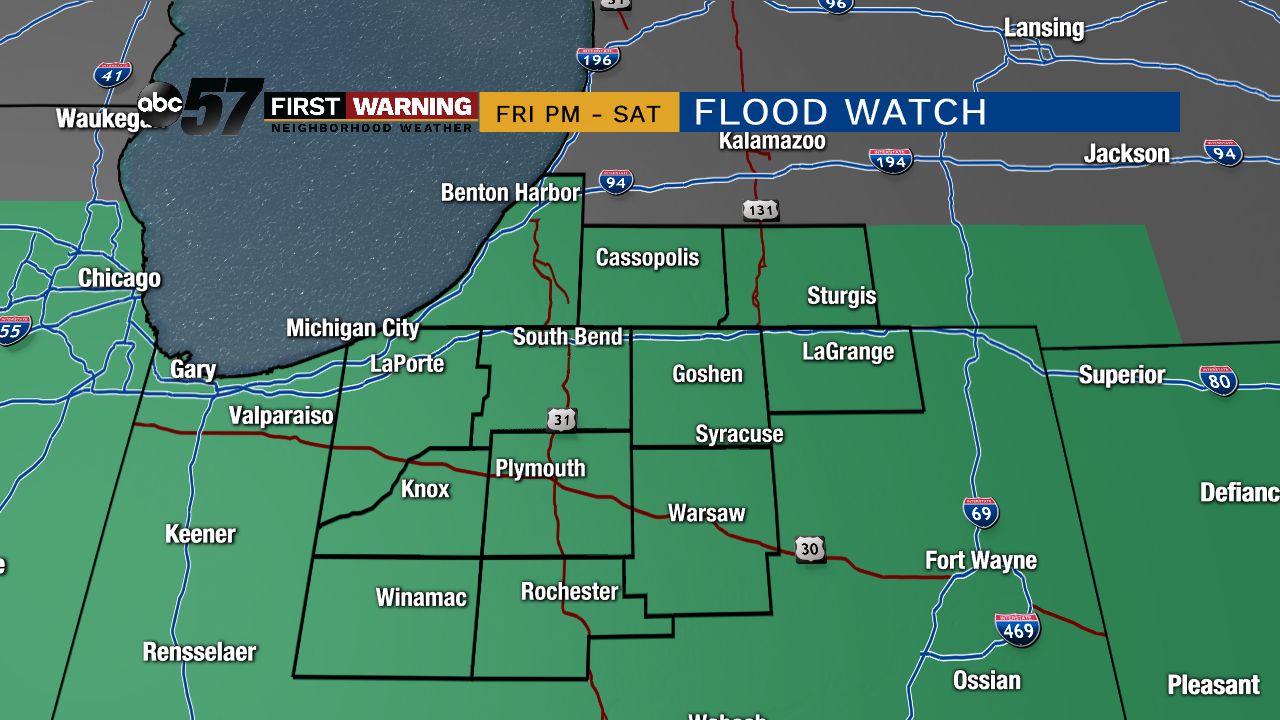 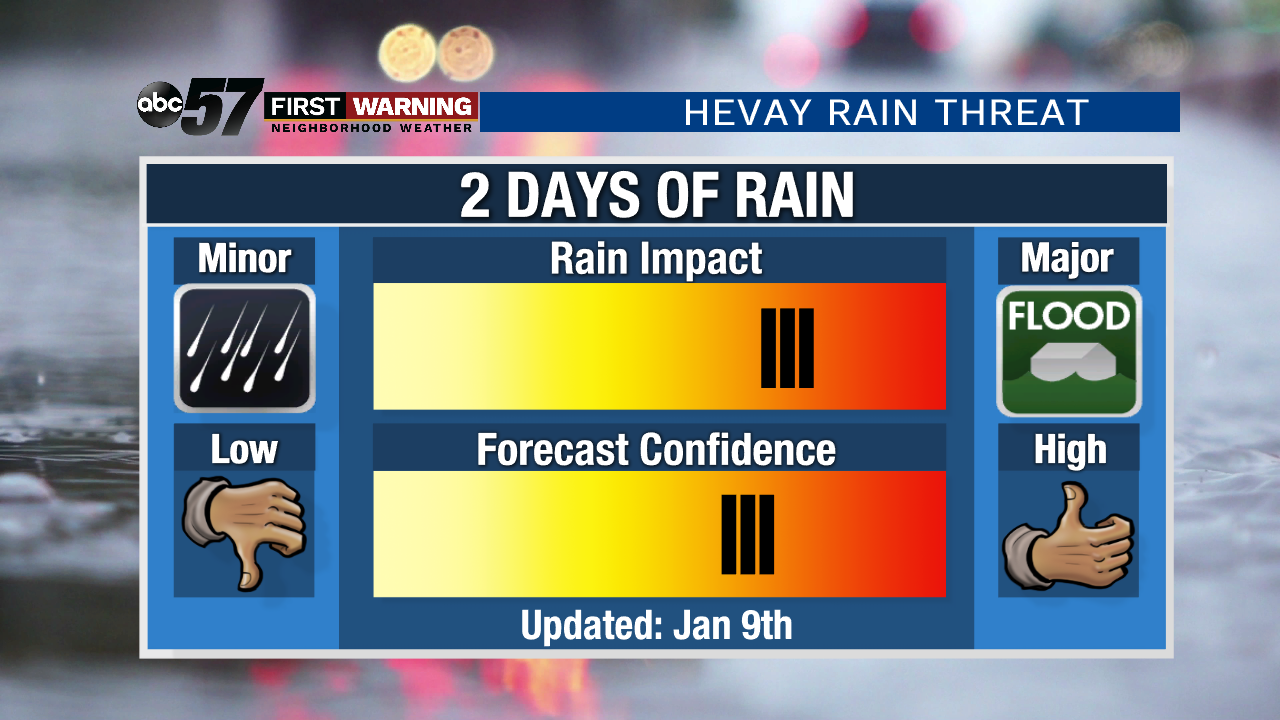 Rainfall totals are forecast to be 3-4" with locally higher amounts possible. Flooding in low lying areas, along river beds and on some roads are possible. If you typically see flooding in your neighborhood, plan on seeing it from this event. Get your sump pumps checked and prepared for travel delays starting Friday night. While this is A LOT of rain, it will not be as bad as the flooding we say in the Winter of 2018. Thankfully river levels are currently lower and we do not have a snow-pack. 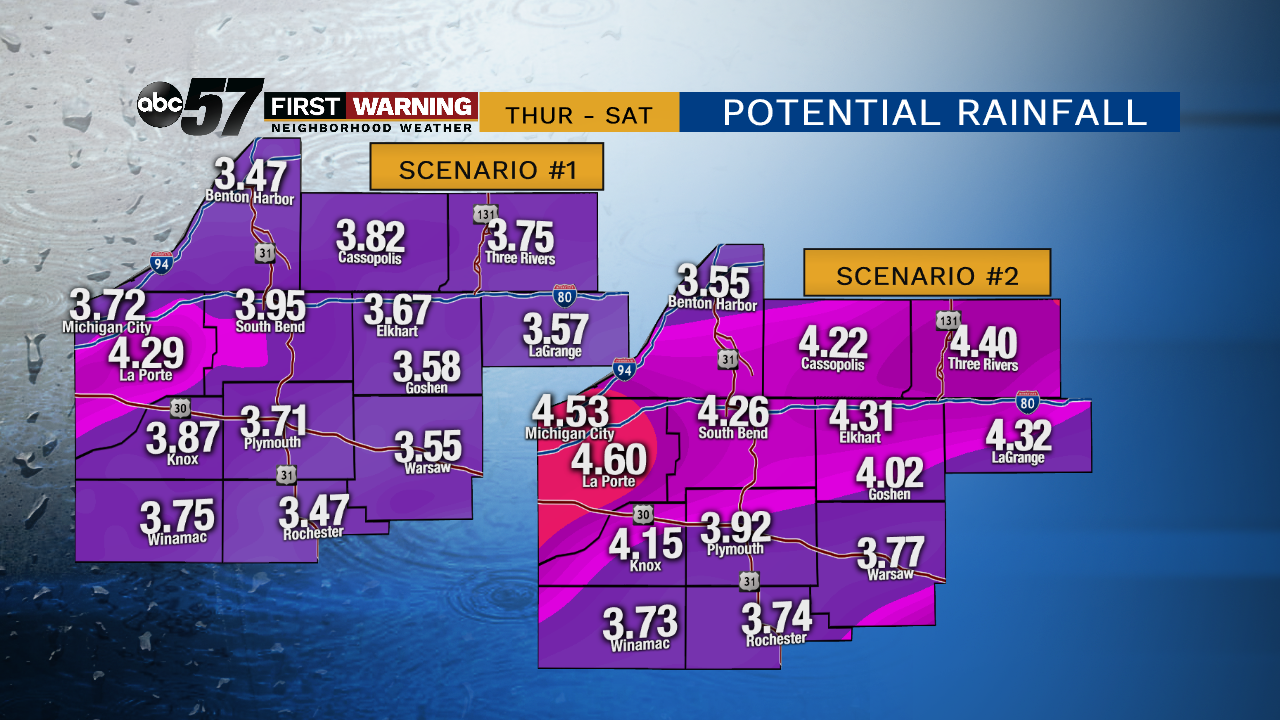 As the heaviest rain is expected during a short period of time, there is a risk of Flash Flooding. The heaviest rain begins around 10-11 PM on Friday and will last until Saturday afternoon. If you come to a road that is covered with water, DO NOT try to drive through it. Turn around and find a different route. 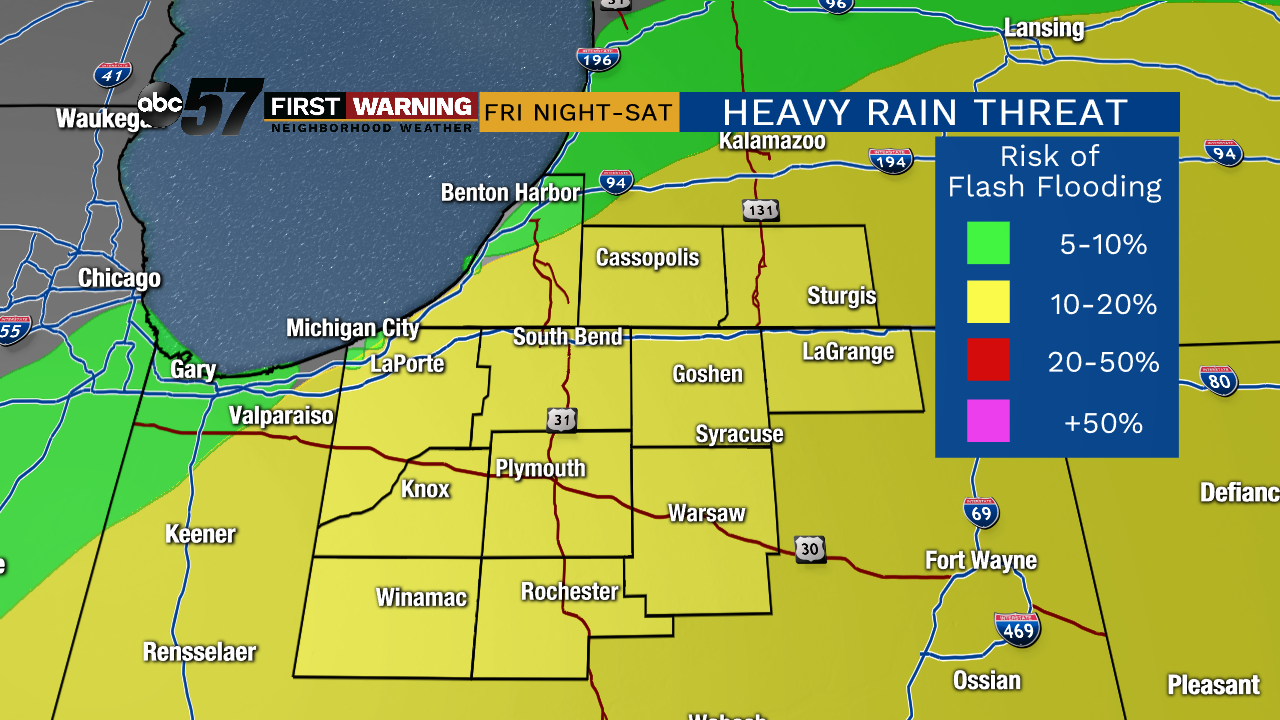 While the rain will continue into Saturday, temperatures will start to drop during the afternoon. There looks to be a period when the rain will mix in with sleet and freezing rain. Now where exactly the transition line of precipitation is at, won't be known until it starts showing up on radar during the actual event. There is confidence that freezing rain will happen, it's just a question of where the biggest impact where be, whether it's in Michiana or further north near Grand Rapids. Very important to stay weather aware and check back for updates! 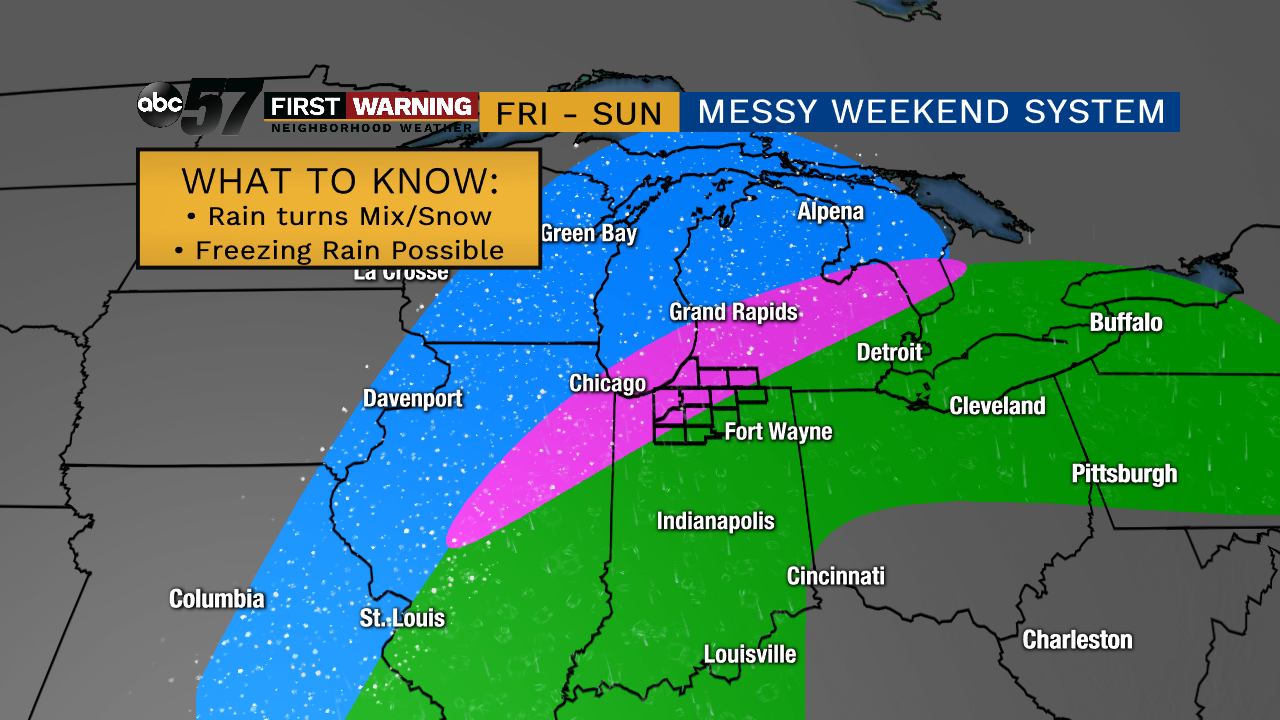 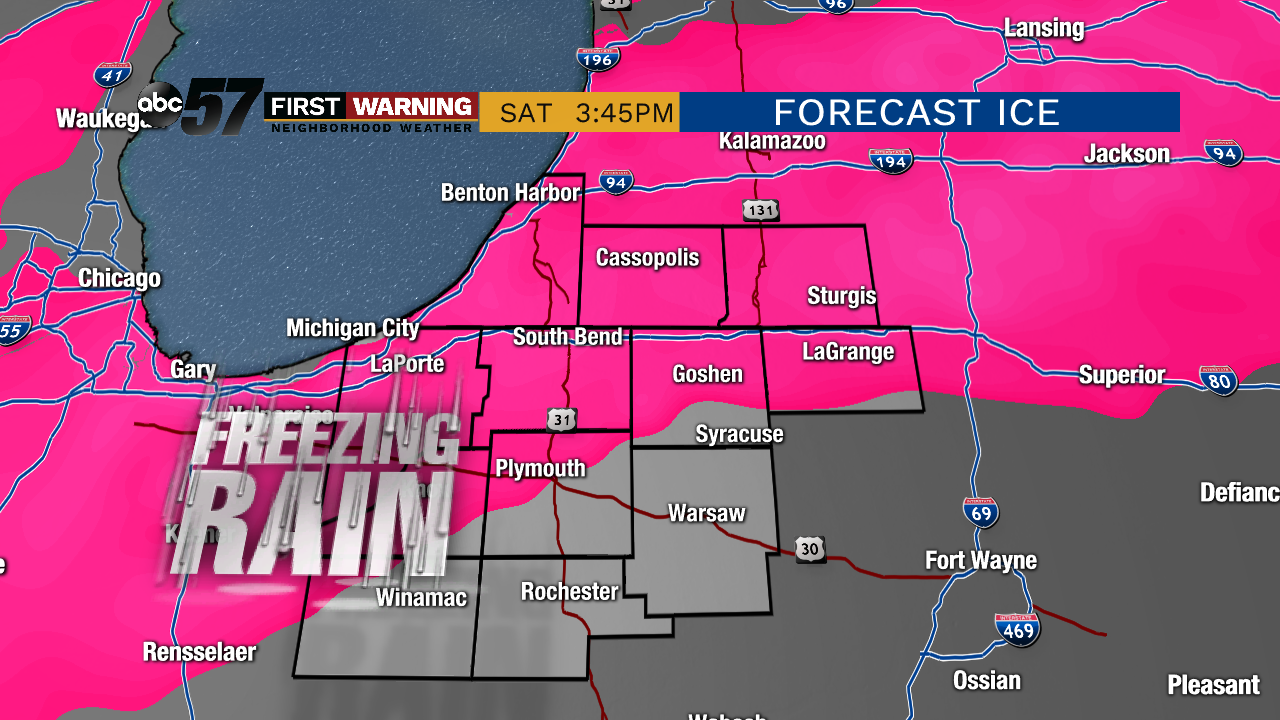 As a recap, here is a breakdown of the threats Saturday. Snow is the lowest of the threats as this event will primarily be a rain event. The wet snow is not expected to add up to much of anything. 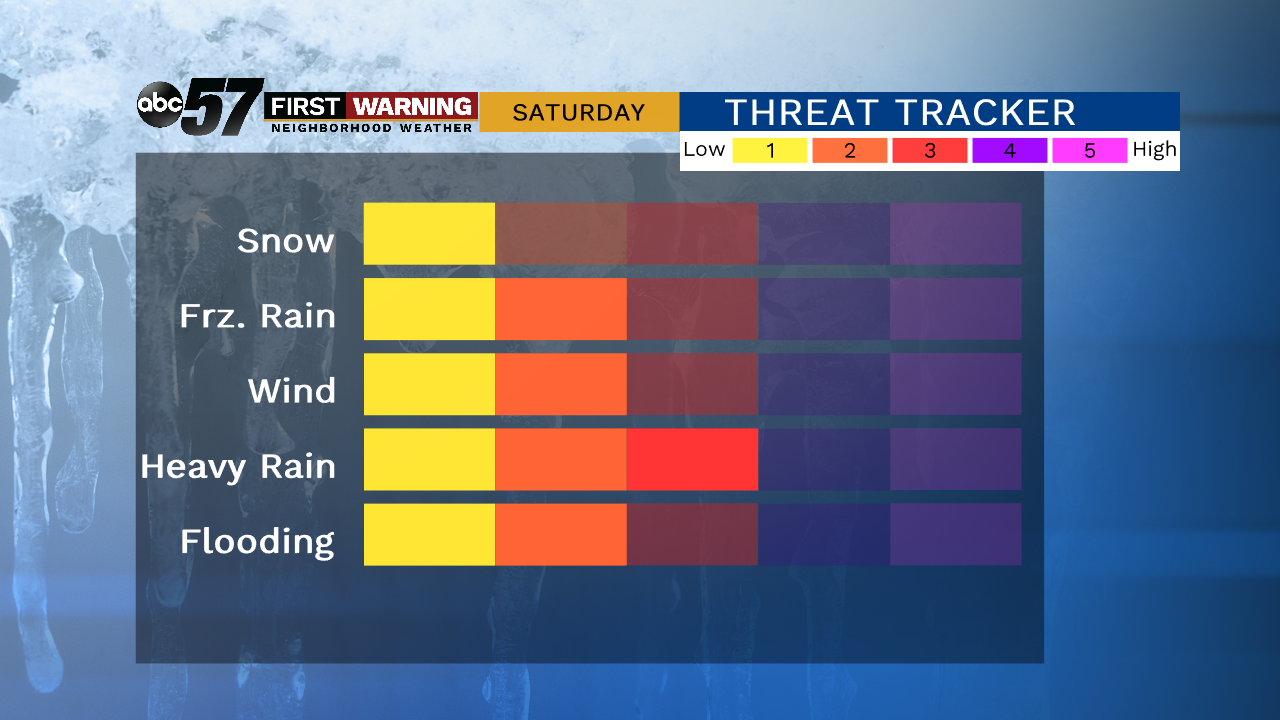