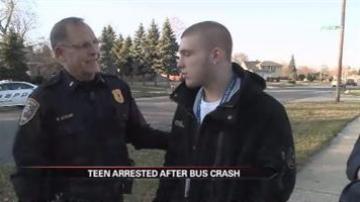 SOUTH BEND, Ind. –  What started off as a normal fender bender ended up with a John Adams High School student being arrested.

When 18-year-old John Adams High School student, Reilly Neuklis was asked about how he rear-ended the back of a South Bend school bus, police suddenly came up and arrested him.

“The bus stopped kind of fast, it seemed like and then, 'Pow,'” said Neuklis.

“In Indiana it is illegal to have metabolites in your system while you are driving,” said  Lt. Gene Eyster.

Around 4 p.m. Tuesday, Neuklis and three other John Adams High School students were driving down Ironwood Road when traffic stopped and they crashed into the back of a school bus.

Medics took the injured student to Memorial Hospital.  There was a student and a staff member on the bus, but they were not hurt.

It seemed like a normal fender bender, but after the scene cleared, police got a tip the student stashed drug paraphernalia in a nearby trash can.

ABC57 cameras were rolling when police arrested Neuklis and took him to the hospital to take a drug test.

“We are also going to take you down for a drug test, which is going to tell me exactly what is in your system and how strong,” said Eyster to Neuklis.