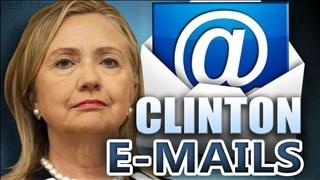 Hillary Clinton permanently deleted all the emails on the private server she used to do official business as secretary of state, the Republican lawmaker who subpoenaed the emails said late Friday.

Rep. Trey Gowdy of South Carolina, chairman of the House committee investigating the attacks on the U.S. consulate in Benghazi, said Clinton's lawyer informed him of the news.

"Secretary Clinton unilaterally decided to wipe her server clean and permanently delete all emails from her personal server," Gowdy said in a statement.

Gowdy had also asked that Clinton turn over her server to the State Department inspector general for an independent review.

In his letter to Gowdy, Kendall said the former secretary of state "chose not to keep her non-record personal emails."

"Thus, there are no ... e-mails from Secretary Clinton's tenure as secretary of state on the server for any review, even if such review were appropriate or legally authorized," he wrote.

But she "has maintained and preserved copies" of work-related, or potentially work-related emails she turned over to the State Department late last year. Kendall did not specify whether the emails were kept in paper or digital form.

In December, Clinton turned over 55,000 pages of emails to the State Department. Clinton has asked that those roughly 30,000 emails be released to the public. State Department officials have said they will release them after they have been reviewed.

"Representatives of Secretary Clinton's office have been in touch with the committee and the State Department to make clear that she would like her emails made public as soon as possible and that she's ready and willing to come and appear herself for a hearing open to the American public," Clinton spokesman Nick Merrill said in an email.

Gowdy said it wasn't clear when Clinton erased the server, but it appears to have been wiped after October 2014, when the State Department asked Clinton to return her official emails to the department.

The chairman subpoenaed Clinton's emails regarding Libya and, last month, the State Department turned over about 300 emails to the committee.

Clinton did not have an official government email account, so her personal server was the primary repository for her emails during her time as secretary of state.

"Not only was the secretary the sole arbiter of what was a public record, she also summarily decided to delete all emails from her server, ensuring no one could check behind her analysis in the public interest," Gowdy said.

But in his letter, Kendall said the federal law governing record retention requires that each federal employee individually decide what emails must be preserved.

"The manner in which Secretary Clinton assisted the State Department in fulfilling its responsibilities under the act is consistent with the obligations of every federal employee," Kendall wrote.

Gowdy has also subpoenaed the emails of about a dozen Clinton aides at the State Department. That request is still outstanding.