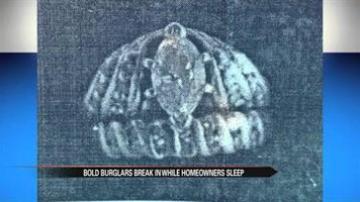 ELKHART COUNTY, Ind. -- The Elkhart Sheriff's Department is investigating a burglary that happened Saturday night in Osolo Township while the owners were at home asleep.

The burglary happened at a home in the 53000 block of Michael Court.

"Nobody should be scared to be in their own home," said Mitch Hulva of Elkhart.

That's how the Hulva family feels about being robbed while they were at home sleeping Saturday night.

"I woke up about 8 a.m. Sunday morning with grass clippings on my kitchen tile floor," said Hulva.

Cash left on the counter and his wife's wedding ring were gone.

Hulva found the garage door up and his wife's empty purse in the backyard.

"The cash is one thing, money is, but my wife's wedding ring? On Sunday morning ironically, was our 23rd wedding anniversary. So I woke up to the rings being missing. That is something and a value that I cannot replace," said Hulva.

Nearby residents said they saw something suspicious last weekend.

"I saw where someone had stood right outside my kitchen window to see if there was anything in my house that they could try to take," said John White. "I just find it amazing that someone would be brave enough to enter a home that has four vehicles in the driveway. I mean they would just have to assume that someone is at home."

The Elkhart County Sheriff's Department is still investigating the burglary.

Angie Hulva says she has spent the past two days checking out pawn shops looking for her stolen wedding ring.