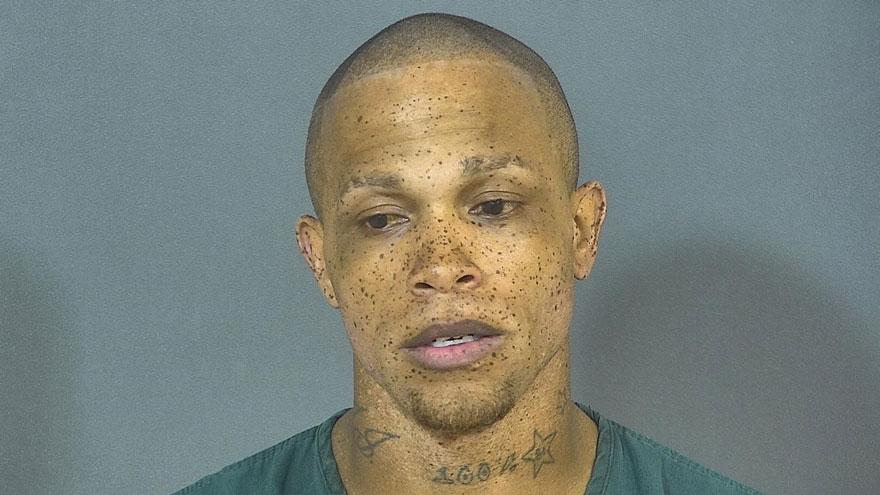 Carlton Collins, 37, has been charged with two counts of armed robbery and one count of possession of methamphetamine.

A resident on Roosevelt Street told police he was lying on the couch with his daughter around 3 a.m. on Tuesday when he heard a knock on the door.

He asked who it was, but didn't catch the name. When he opened the door, he saw a man, later identified as Collins, pointing a gun at him, reports said.

Collins walked into the male victim's bedroom and took $500 from the victim's wallet, reports said.

The victim told police Collins then went into the living room, slapped his female friend in the face, then took her cell phone, according to the probable cause affidavit.

Collins left the house and drove away in a silver Honda Accord, reports said.

The female victim told police Collins is an ex-boyfriend of hers and there have been ongoing issues.

The male victim provided police with surveillance video of the incident.

Approximately one hour later, officers located the silver Honda Accord at a home in the 1300 block of Queen Street in South Bend, reports said.

Officers surrounded the home and attempted to make contact with the occupants of the home. A woman inside told police Collins was upstairs.

Officers entered the house and yelled for Collins, then heard a door slam.

Collins then allegedly climbed out of a window onto the roof of the house.

Police said Collins was acting erratically, saying he was going to jump off the roof and that police should kill him, according to reports.

Collins went back inside the house through the window, then a short time later went back onto the roof.

While he was outside, officers went into the home to secure Collins. When he was away from the edge of the roof he was tasered and taken into custody.

On the roof, officers found a grocery bag with a clear plastic bag that contained methamphetamine, according to the probable cause affidavit.

Collins was arraigned on Thursday.