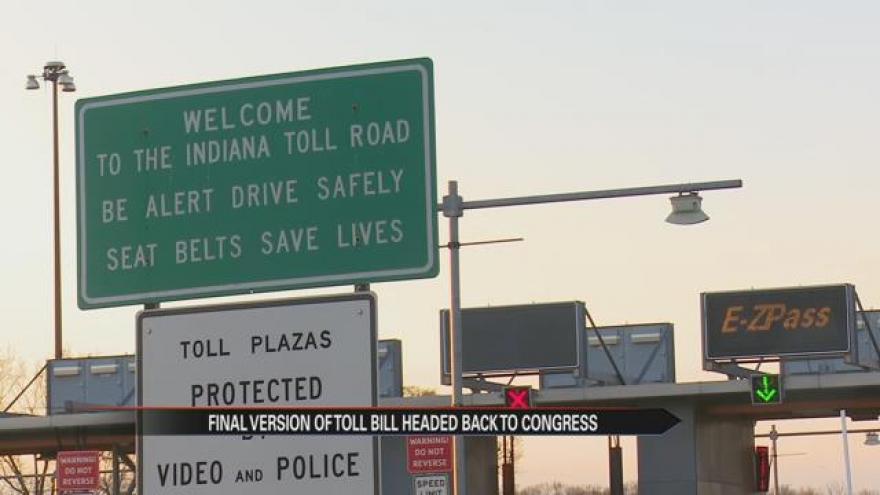 The State Assembly is one step closer to more toll roads around the state of Indiana. The conference committee reviewing the state's transportation bill agreed upon a final version Thursday.

The bill gives the government the ability to add tolls to roads besides the Indiana Toll Road, like interstate highways and bridges.

It also gradually raises the gas tax over the next couple of years.

Some people are concerned the added collection points will take a toll on drivers.

Thanks to House Bill 1002, Martinez could have to carry a little more cash when she heads to Chicago in the future.

The bill, which is aimed at increasing infrastructure revenue, removes restrictions on when a tolling project can be undertaken.

That could mean more stops with no more lanes added.

“They’re bad for businesses. They’re bad for commuters, and they raise the costs of goods and the cost of living anywhere in the communities that they are in,” said No Tolls Indiana spokesman, Stephanie Kane.

“And it slows the traffic down. I mean already, when we’re on the toll road going to Chicago, we are backed up in traffic so much, so I don’t think that they should do that,” said Martinez.

We timed how long it took a van to get through the ticketing lane—eight seconds.

Others, who use the toll road every day for work, say those eight seconds could actually help them in the long run.

“As a driver, I need good roads to drive and convey my fair trade to my destination, so if they increase the tolls to be able to raise money to build the roads, I don’t have a problem with that,” said a DHL deliveryman, Hilary Bangbare.

The grassroots organization No Tolls Indiana, however, has a big problem with the bill.

“What we have been fighting against is the fact that these tolls could be anywhere in Indiana, and we don’t know where it would be yet or how much they might charge, and once a toll goes up, it does not go away,” said Kane.

“They do have to come up with funding our roads somehow. The point that No Tolls Indiana is trying to make is that tolls are the worst option of all,” she said.

Now that the conference committee has agreed on a final draft of the bill, it goes back to the full house and senate for a final vote.

If it gets passed, it heads to the governor for a signature.

To be clear, the state does not own the toll road.

That’s why giving the government the option to collect tolls on other Indiana roads could help raise funds for infrastructure improvements.

Click here to read the full text of the bill.