How the Westminster attack unfolded 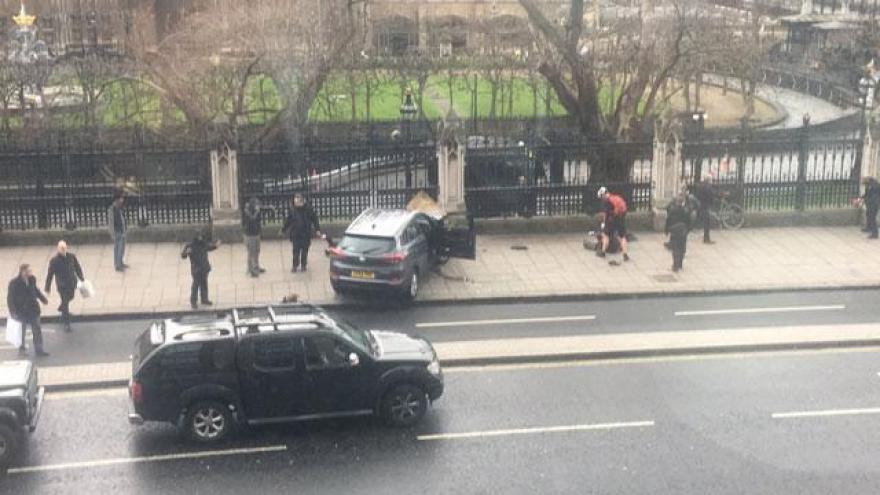 LONDON (CNN) -- London was struck by a terror attack on Wednesday that killed three people and left dozens injured in the city's deadliest attack in over a decade. Here's how it unfolded:

The assailant drives a vehicle over Westminster Bridge into a crowd, injuring dozens, including three police officers.

The car drives on and crashes into perimeter railings surrounding the Houses of Parliament.

Attacker runs around the corner, approximately 50 meters, then through Parliament's gates, where he stabs an unarmed policeman.

Police open fire on attacker, who is shot dead.

First ambulance crew arrives at the scene. Prime Minister Theresa May is evacuated from Parliament around the same time.

The sitting House of Commons is suspended and Members of Parliament are also placed in lockdown.

David Lidington, Leader of the House of Commons, tells MPs a police officer was stabbed and the assailant appeared to have been shot. He adds that an air ambulance is removing casualties from scene.

MPs are told to remain in the chamber and stay away from windows.

Westminster is put on lockdown by police, including roads, Parliament buildings; the Westminster Underground station is also secured. TV images emerge of a car crashed into the railings.

Authorities tell public to avoid the expanded area around Parliament. The gates of Buckingham Palace are closed as well as Downing Street and Horse Guards Parade.

The London Eye Ferris wheel, a sightseeing destination on the South Bank, is suspended with tourists still inside the capsules.

A woman is pulled from the River Thames alive but with injuries, she was found near Westminster Bridge, where the attack occurred, a Port of London Authority spokesman tells CNN.

"Our strength as a city is our ability to stand together at such terrible times," Rowley says. "My thoughts are with all those who have been affected by today's attack -- and as a service we have lost one of our own as he acted to protect the public and his colleagues.

"This is a day that we had planned for -- that we all hoped would never happen -- but sadly it is now a reality."

Hundreds of people are evacuated from Parliament to nearby Westminster Abbey, Britain's Press Association news agency reports. A Metropolitan Police superintendent says it will take around 90 minutes to process everyone. Authorities add that people will be assessed to see if they have any information.

UK Parliament tweets that both the House of Commons and House of Lords will open and sit as usual on Thursday despite the attack.

MP Stephen McPartland tweets: "We have just been released from Parliament." The House of Commons later confirms to CNN that the Palace of Westminster is no longer in lockdown.

Prime Minister Theresa May condemns "sick and depraved terrorist attack," in a briefing. She makes her remarks after meeting with COBRA, the UK's emergency cabinet committee.

Mark Rowley announces that the death toll has risen to four, including one police officer, and 40 were injured in the attack. He later revises the death toll back to three.

He announces the officer killed was Keith Palmer, 48, a husband and father and a 15-year veteran.

At Scotland Yard, headquarters of London's police force, flags were flying at half-staff on Wednesday evening, in honor of Palmer and the other victims.