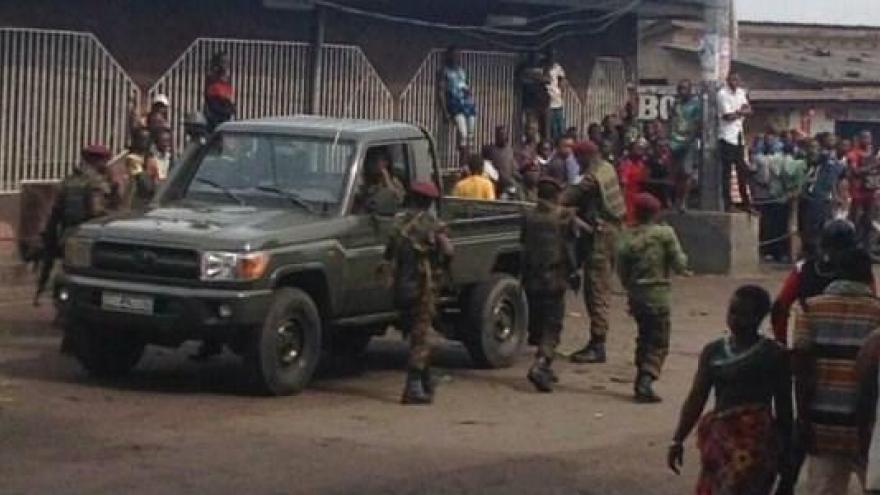 (CNN) -- An international rights organization has told CNN that dozens of people have been killed in the Democratic Republic of Congo as political turmoil roils the Central African country.

Opponents of the government took to the streets earlier this week to protest the national electoral commission's failure to announce a timetable for the presidential election, due to take place in November.

Opposition party headquarters were torched overnight Monday in retaliation over the protests, a government spokesman said.

Lambert Mende Omalanga, minister of communication, told CNN: "We condemn revenge attacks as a manner of justice. We need calm from everyone."

Opposition leader Martin Fayulu had called on the government to abide by the constitution and for President Joseph Kabila to step down on December 19.

Fayulu posted a message on Twitter last week saying protesters should stage a sit-in in front of the elections commission Monday. A delay in the elections would allow Kabila to stay in power beyond the end of his second term.

But Omalanga dismissed calls from the opposition for Kabila to resign then, saying, "President Kabila will step down only when a new president is elected.

"I don't think it is something credible. We are meeting in a national dialogue in order to organize free and fair elections," he told CNN.

"Those who launched these so-called protests may be afraid of the outcome of any election that may be held," Omalanga said, adding that the situation was currently calm in Kinshasa.

The head of the UN Organization Stabilization Mission in the Democratic Republic of the Congo, or MONUSCO, urged everyone "to exercise maximum restraint."

"I call on the Congolese authorities to ensure that national security forces respect fundamental freedoms, and for the use of nonlethal force in crowd control in their response to protests. I also call on all concerned political leaders and their supporters to desist from undertaking any further acts that could continue to exacerbate the situation and heighten tensions," said MONUSCO's Maman Sambo Sidikou.

UN Secretary-General Ban Ki-moon, the United States, France, former colonial power Belgium and the African Union also condemned the violence and called on the government to set an election date.

"The timetable must be made available as swiftly as possible and the elections held with as little delay as possible," the French Foreign Ministry said.

Kabila succeeded his father, Laurent Kabila, after his assassination in 2001.

The central African nation hasn't had a peaceful transition of power since gaining independence in 1960.