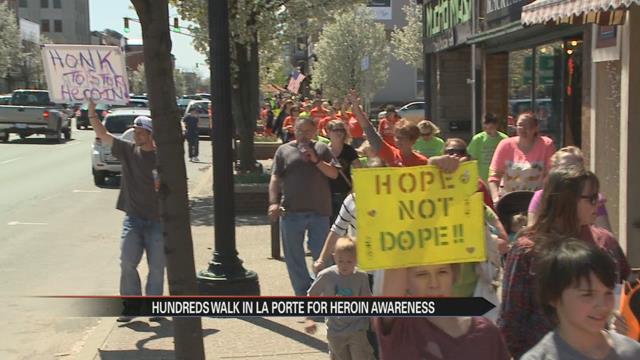 A growing heroin epidemic in the city of LaPorte brought hundreds of people out Saturday to walk for awareness.

“Up with hope and down with dope!”

Chants like this were ringing throughout downtown LaPorte Saturday.

“Wake up LaPorte! Enough is enough!”

“By bringing LaPorte’s heroin problem to the forefront, we can finally start to work on a solution,” recovering addict and volunteer Christine Salzer said.

Teyama Wilhelm started the walk three years ago after losing her nephew and brother-in-law to heroin.

“I have to do it for them,” Wilhelm said. “They’re not here and that’s why we are a voice for them.”

That phrase, “A Voice For Them,” is the name of a new non-profit Wilhelm has started with the help of Sean Fitzpatrick, LaPorte County’s deputy coroner.

“We’re not gonna turn a blind eye to it like other people have,” Fitzpatrick said.

People from all walks of life turned out to Saturday’s walk.

“Over 22 kids died of heroin overdose just from our high school in LaPorte,” Cook said.

Cynthia Weathers was walking to, honoring her son and daughter who both died from heroin. She buried her daughter, CJ, just last week.

Participants walked throughout downtown LaPorte Saturday, holding pictures and posters dedicated to lost loved ones, while urging passersby to honk their horns in support.

It was all in an effort to raise awareness about an emergency in the city, something Weathers described as “the plague.”

Participants said the ultimate goal is to educate people and help those still battling before it’s too late.

“All roads for drugs lead to me, the coroner,” Fitzpatrick said. “And you don’t want me standing over you.”

The walk ended with balloons being released into the air, as the hundreds of participants cheered and clapped.

“A Voice For Them” is hoping to grow so that it can provide struggling addicts with treatment. You can visit the organization’s Facebook page to learn how you can help.