Hurricane Maria is now a Category 5 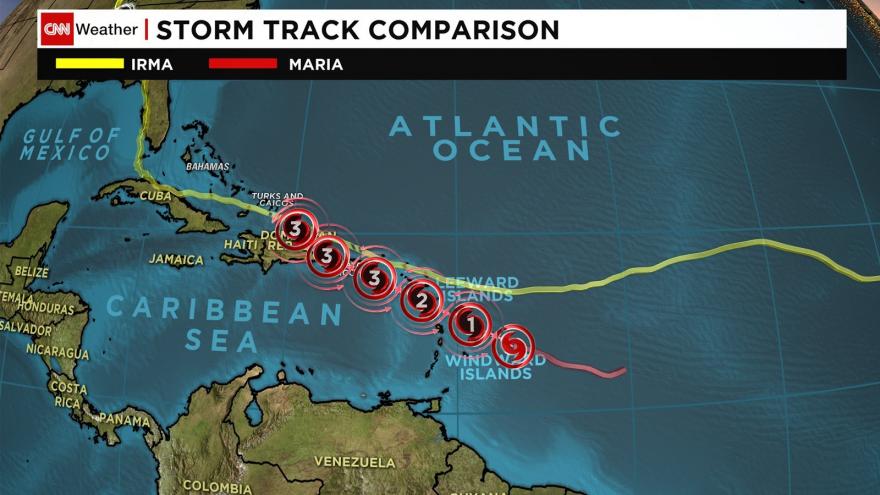 Hurricane Maria became a Category 4 storm on Monday afternoon as it barreled toward Dominica in the Caribbean's Leeward Islands and took aim for the US territory of Puerto Rico.

"We want to alert the people of Puerto Rico that this is not an event like we've ever seen before," Gov. Ricardo Rosselló told reporters Monday.

"The eye and the intense inner core is expected to pass near Dominica during the next few hours," the National Hurricane Center said in its 5 p.m. advisory. "Maria is likely to affect Puerto Rico as an extremely dangerous major hurricane, and a hurricane warning has been issued for that island."

Maria packed sustained winds of 130 mph (215 kilometers per hour), bringing the chance of life-threatening storm surge, the advisory said, accompanied by "large and destructive waves," and "hitting the Leeward Islands, the Virgin Islands, and Puerto Rico."

A US Air Force Reserve C-130 Hurricane Hunter took off from Curacao for Maria earlier to measure the storm strength, the hurricane center said.

Forecasters predict mudslides caused by heavy rains and "life-threatening flash floods across the Leeward Islands, including Puerto Rico and the US and British Virgin Islands."

As of 5 p.m. ET, Maria was centered about 35 miles east-southeast of Dominica and 55 miles northeast of Martinque, the National Hurricane Center said. The mammoth storm was moving west-northwest at 9 mph.

And for the first time in 85 years, Puerto Rico is expected to suffer a direct landfall from a Category 4 hurricane. Puerto Rico's governor has declared a state of emergency ahead of that landfall, which will likely happen Wednesday.

Dominica is a small island with a population of nearly 74,000 about halfway between Puerto Rico and Trinidad and Tobago, according to the CIA World Factbook. It's nearly 290 square miles (751 square kilometers) and "slightly more than four times the size of Washington DC."

"The Dominican economy has been dependent on agriculture -- primarily bananas -- in years past, but increasingly has been driven by tourism as the government seeks to promote Dominica as an 'ecotourism' destination," the factbook said.

Hours before Maria's expected landfall on Dominica -- and just over week after the island was brushed by Irma -- Prime Minister Roosevelt Skerrit urged residents to take any belongings that could become dangerous projectiles indoors.

"The next few hours should be placed on cleaning up around the house and on your properties rather than stockpiling weeks of foods and other supplies," Skerrit said in a televised speech.

"This is not a system that will linger very long. Therefore, the goal must not be on stockpiling supplies but on mitigating damage caused by flying objects."

"Our company, we have lost in excess of a hundred boats so far by Hurricane Irma, and for that reason we're not taking any chances," Joseph said.

Puerto Rico sheltered many of the evacuees who fled Hurricane Irma's wrath in other Caribbean islands. Now those evacuees and native Puerto Ricans are bracing for another catastrophic hurricane.

Issa Alexander barely survived Irma when that hurricane shredded his family's home in the British Virgin Islands. He evacuated to San Juan, Puerto Rico -- only to face the prospect of more devastation.

He's terrified for relatives still in the British Virgin Islands -- especially because the lines of communication are still down.

"I don't even know if they know that it (Maria) is coming," Alexander said. "I can only hope that the same spirit that everybody has -- the same God that helped everybody to survive is still looking over them."

Puerto Rico housing authorities said there are 450 shelters able to take in 62,714 evacuees, and up to 125,428 in an emergency situation. But there are six fewer shelters available post-Irma, since some schools still have no electricity.

What to expect from Maria

Other Leeward Islands are now under hurricane warnings, including Guadeloupe, Dominica, St. Kitts, Nevis and Montserrat. The US Virgin Islands, the British Virgin Islands and Martinique also under warnings.

"Maria will affect portions of the Leeward Islands and the British and US Virgin Islands as an extremely dangerous major hurricane during the next couple of days, and hurricane warnings are in effect for many of these islands," the center said.

President Trump on Monday issued an emergency declaration for the US Virgin Islands and ordered federal assistance to augment the territory's storm response initiatives.

The British Foreign Office said more than 1,300 troops are in the region, on affected islands or nearby locations, ready to help after Maria goes by. One military team has been deployed to the British Virgin Islands.

A British military reconaissance team is on standby to go to Montserrat and assess needs, the office said. The HMS Ocean is set to arrive in the area at week's end with 60 tons of government supplies.

Up to 12 inches of rain -- and even 20 inches in some areas -- are expected to deluge the central and southern Leeward Islands through Wednesday night, the National Hurricane Center said.

"Rainfall amounts of 6 to 12 inches with isolated maximum amounts of 25 inches are expected across Puerto Rico," the NHC said. "Rainfall on all of these islands could cause life-threatening flash floods and mudslides," it said.

'More dangerous than Hugo and Georges'

"This is an event that will be damaging to the infrastructure, that will be catastrophic, and our main focus -- our only focus right now -- should be to make sure we save lives."

"It is time to seek refuge with a family member, friend, or move to a state shelter because rescuers will not go out and risk their lives once winds reach 50 miles per hour."

If Maria strikes the island as forecast, it will be "more dangerous than Hugo and Georges," he said.

Hurricane Hugo killed five people in Puerto Rico in 1989, and Hurricane Georges caused more than $1.7 billion in damage to the island in 1998.

At 5 p.m. Monday, Hurricane Jose was about 250 miles east-southeast of Cape Hatteras, North Carolina, and was moving north at 10 mph.

The tropical storm warning is in effect for parts of southern New England, from Watch Hill, Rhode Island, to Hull, Massachusetts, the NHC said.

"Minor to moderate coastal flooding is possible from Delaware to southern New England," the center said. "Swells generated by Jose are affecting Bermuda, the Bahamas, and much of the US east coast."

Jose is expected to weaken in the next few days, but will likely remain a hurricane through Tuesday.