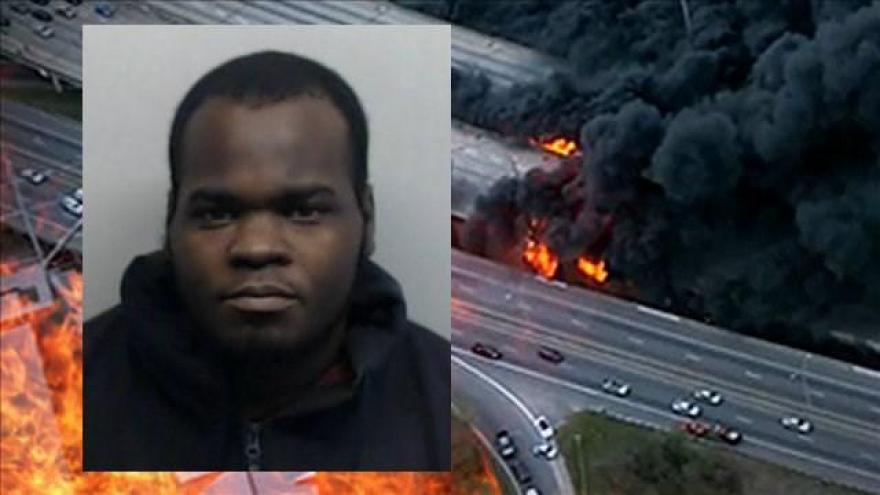 ATLANTA (CNN) -- The man accused of arson in a fire that collapsed part of an elevated interstate in Atlanta, triggering what's expected to be months of traffic headaches in one of the nation's most congested cities, is being held on $200,000 bond, a Fulton County, Georgia, Sheriff's Office spokeswoman said Saturday.

Basil Eleby is charged with first-degree arson and first-degree criminal damage to property, spokeswoman Tracy Flanagan said. He is due in court next on April 14.

Eleby and two others -- all believed by investigators to be homeless -- were arrested in connection with Thursday evening's fire under Interstate 85, Jay Florence, the state's deputy insurance and safety fire commissioner, said Friday.

The fire started in a state-owned storage lot under the highway, causing part of northbound I-85 to collapse and also damaging the southbound portion, forcing the closure of all five lanes in each direction for the foreseeable future. No one was injured.

Investigators believe Eleby started the fire intentionally and that Sophia Bruner and Barry Thomas, who both were charged with trespassing, were with him, Florence said. Only Eleby was jailed overnight Friday, said Sgt. Cortez Stafford, a Atlanta Fire Rescue Department spokesman.

Florence didn't say how investigators came to suspect the three or say anything about a motive. Neither did he say how the fire started.

What was under the highway?

The region, already accustomed to gridlock, is struggling to face its new commuting reality. It will take "at least several months" to rebuild the collapsed and otherwise damaged portions of I-85, Georgia Department of Transportation Commissioner Russell McMurry said.

The closure comes as hordes of spring break vacationers are poised to drive though the region's urban hub.

The fire ignited in a fenced-in area under the expressway where the state stores construction materials, McMurry said. Those materials include HDPE -- high-density polyethylene -- pipes used in the "traffic management, cabling, fiber-optic and wire network," he said.

HDPE pipes encase and protect cables, and are widely used in the transportation industry to build "smart" highways that provide information to drivers, control traffic signal lights and tollways. The pipes are also used in the distribution of natural gas and by telecommunication companies such as AT&T and Google Fiber.

The flammability of HDPE is relatively low, Tony Radoszewski, president of the Plastics Pipe Institute, a trade group based in Irving, Texas, told CNN. HDPE would have to be exposed to a high-temperature flame for a considerable amount of time to burn, he said.

"Somebody had to start a fire. It doesn't combust by itself, it needs fuel," Radoszewski told CNN. "Someone had to do it. It's not like someone would have dropped a match and it started."

Investigators are still working to determine how the fire started.

"We're as eager to learn the cause of this fire as anyone," McMurry said.

Firefighters were alerted at 6:12 p.m. Thursday to the blaze under I-85 in northeast Atlanta, north of the highway's split with I-75.

They rushed to the scene and fought the flames at street level as motorists on the elevated interstate drove through thick black smoke billowing up from below.

"There was a 40-feet or higher wall of fire. Power lines were falling and arcing heavily and falling in the streets," Stafford, the fire department spokesman, told CNN.

Firefighters first battled the blaze using water from tanker trucks because the area has few hydrants, he told CNN.

But the conflagration wasn't dying fast enough. So fire officials summoned two fire trucks from an outpost of the city's fire department at Hartsfield-Jackson Atlanta International Airport, some 22 miles away.

Those trucks -- which carry especially powerful hose nozzles and 3,000 gallons each of a water-foam mixture -- combined efforts with resources already on the ground, Stafford said.

As they fought the flames, concrete began falling from under the bridge, he said. Firefighters were asked to step back.

By that time, the incident had halted traffic. And though the highway -- which carries more than 220,000 cars per day -- is normally jammed with cars at that hour, no one was hurt.

Amid the rubble of the fallen pavement, firefighters continued their work. Owing to the extra volume of water from the airport trucks -- not the addition of the foam they carried -- the fire was brought under control, Stafford said.

Social media users posted surreal images showing motorists -- before the collapse -- choosing to drive into the black smoke that wafted onto the highway as the fire burned beneath them.

Three sections of northbound I-85 -- including the part that collapsed -- and three sections of southbound I-85 will have to be replaced, McMurry told reporters Friday afternoon. That's 350 feet of highway -- nearly a football field -- in each direction, he said, adding that demolition of these sections started Friday and will last into Monday.

Officials scrambled to come up with alternate routes and encouraged riders to use public transit. Compounding long-term gridlock, the Atlanta Braves will play this season at their new stadium along the I-285 bypass, which saw a 50% bump in traffic volume the day after the collapse, McMurray said; major local streets saw a 25% increase in traffic.

MARTA, Atlanta's rail and bus system, will offer extended service through the weekend taking some of the burden off residents.