Icicles dangling from your roof can become a hazard 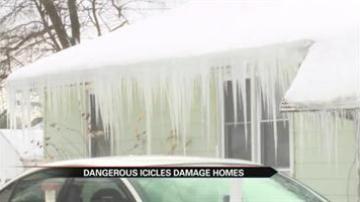 MISHAWAKA, Ind. -- The fluctuating temperatures have created a perfect environment for icicles to form on roofs. They can be dangerous if they fall on you - and damage your gutters or roof if not taken care of properly.

Roofers say you shouldn't try to deal with them yourself - you should leave it to the professionals so you don't cause any damage to your home or hurt yourself.

Farrell Bever has lived at his home in Mishawaka for 14 years and says he's seen many harsh winters.

"The neighbors over there see how long they are there? That's about as long as I've seen them since I've been here," said Bever.

This year he's says he fed up with fighting the ice hanging from his roof.

"They're just annoying more than anything else," said Bever.

Experts say we have perfect conditions for ice this year, with lots of snow and bitter cold temperatures.

"The snow actually insulates the ice dam so it will continue to develop and then it also feeds it as well," said Jason Carrico, owner of Advanced Roofing.

If you don't get rid of the snow on your roof, it can cause water damage inside your home.

"I'm afraid that's what is going to happen now when all of this thaws, the water is going to build up behind all of that ice and if you don't fix it, it will run down your walls on the inside," said Bever.

Carrico says they have ways to keep that from happening.

"What we're doing is we're removing the snow along the lower edges of the roof and actually breaking channels in the ice to relieve the water that builds up behind that ice dam," said Carrico.

Carrico says you should leave icicle removal to the pros for your own safety and to protect your home.

"Once the ice has developed it's really hard to get rid of safely because you don't want to start chipping away at all of the ice because you can actually damage the roof," said Carrico.