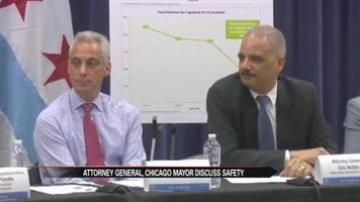 He took part in a panel discussion on rising graduation rates declining student suspensions and fewer students shot and killed.

The panel said this year has been the safest one yet but not by much.

Murders of students are down as are shootings.

The Chicago Mayor says Eric Holder has helped free up money as the schools shift to more productive practices.

"Mistakes are natural, conflicts are natural, we have to learn from these mistakes," said Chad Adams, the Principal of Sullivan High School.

Those stands at 65 percent this year with 82 percent of freshmen on track to graduate in just three years.
Share this article: