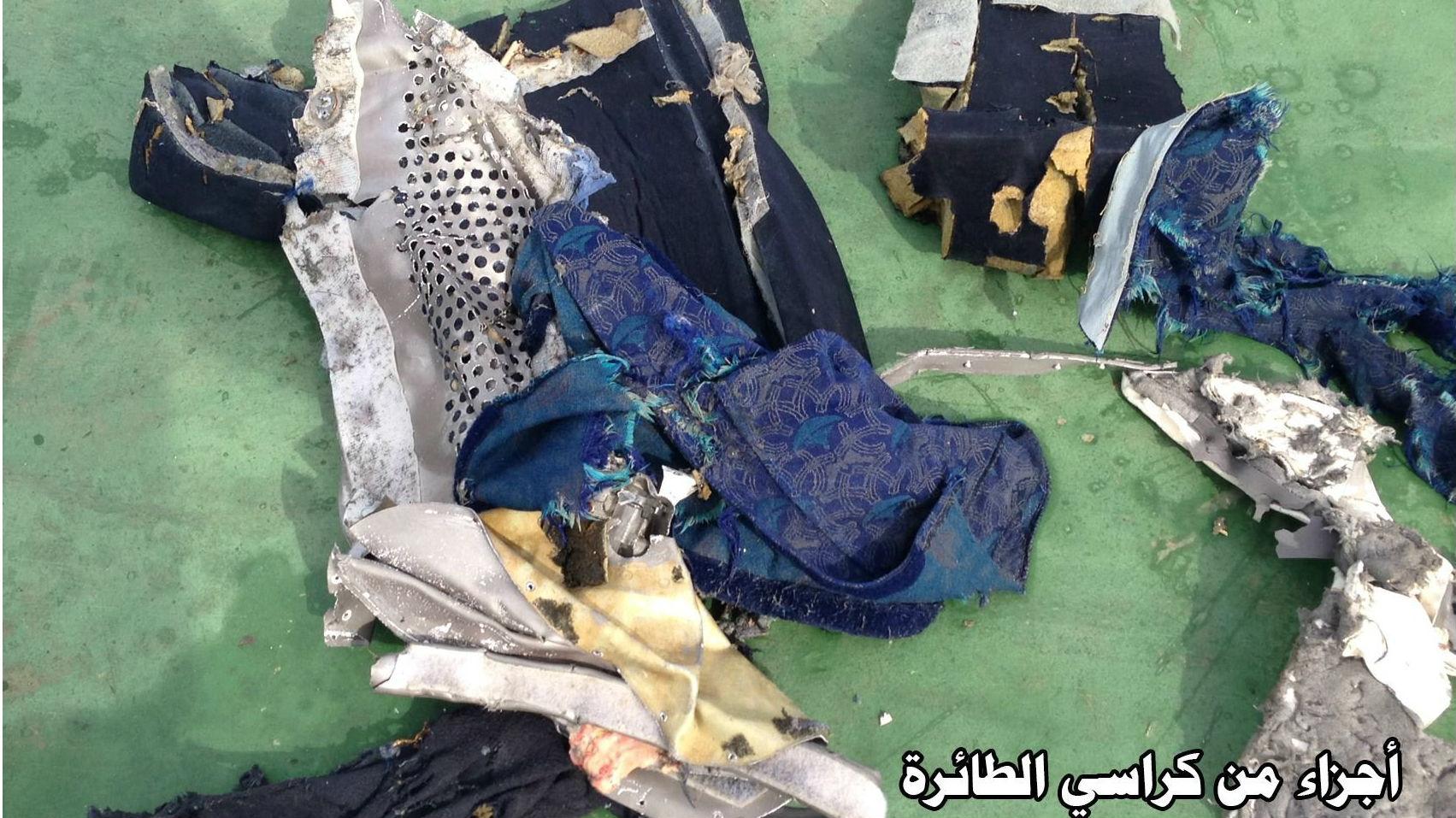 The chunks of debris included an uninflated life vest, a seat, a purse, shoes, carpet, a scarf, parts of chairs and cushions and a sling bag. The EgyptAir label appeared on one piece of wreckage.

"The search is ongoing. It has uncovered initial pieces of the aircraft, body parts, belongings of the deceased, and it will continue hopefully until we can ascertain exactly where the plane has gone down," Egyptian Foreign Minister Sameh Shoukry told CNN's Becky Anderson.

Shoukry said the searchers are pressing on, but it isn't clear how long it will take to recover the cockpit voice and flight data recorders -- the so-called black boxes -- to find out what happened.

The United States, France, Britain, Russia and others are eager to cooperate in the search, Shoukry said, adding he anticipates assistance in finding the recorders.

"We do not, I think, have the technical abilities to operate in such deep waters, whereas many of our partners might have this facility," he said.

No survivors have been found. Egyptian officials have said they suspect the crash was caused by an act of terror, but no group has come forward to claim credit.

French Foreign Minister Jean-Marc Ayrault told passengers' families Saturday that "no theory" has been ruled out.

The Airbus A320 carried 56 passengers and 10 crew members and security when it left Charles de Gaulle Airport in Paris late Wednesday headed for Cairo.

Most of the passengers were Egyptian -- 30 in all.

In France, aviation officials revealed that the plane sent automatic messages about smoke in the front of the aircraft just before it crashed early Thursday.

That flight data indicated smoke alerts occurred near the cockpit minutes before the crash.

BEA, France's accident investigation agency, "can confirm that the aircraft sent automatic ACARS messages about smoke in the front of the aircraft," spokesman Sebastian Barthe said.

Barthe said he cannot confirm the cause of the smoke or its origins.

The alerts don't necessarily mean a fire occurred on the plane or that the crew even knew about the alerts, which are automatically transmitted, aviation experts cautioned.

"(The data) doesn't tell us anything, whether it's an explosion because of a bomb or because of a mechanical fault, but immediately it narrows down the area that we're looking at," CNN aviation analyst Richard Quest said.

"We're now no longer worried about wings or what else might have happened, or other flight control surfaces."

EgyptAir issued a statement on the ACARS information. It said: "We are looking at all the information that is collected but it is far too early to make judgment or decision on single source of information such as the ACARS messages, which are signals or indicators that may have different causes thus require further analysis, as part of the overall investigation."

Data sent over a few minutes

Aviation experts held different views of what the data may signify.

He said it was significant that the data was sent over a period of one to two minutes.

"Now if it was a bomb, the characteristic bomb ... (it) would have ruptured the skin of the aircraft," Soucie said. "This is not the indication you would have had, because a bomb that would do that would be instantaneous, and these reports would not have gone over two minutes like they do."

The ACARS data, however, could be consistent with a catastrophic failure -- be it from an intentional act or mechanical breakdown, according to an aviation official and a former Federal Aviation Administration official.

The aviation official said if there were a fire on the plane, it would tend to burn slow enough for pilots to send an emergency message. These messages could have been a result of wires shorting out and malfunctioning as the plane broke apart.

The aviation official said the messages, while random, would be consistent with what a system would send on a plane falling apart.

There have been electrical problems with window anti-ice heaters in A320s. In 2003, the FAA required windshields replaced in all A320s in the United States. It's not known whether Egypt followed the FAA directive.

The plane disappeared from radar early Thursday as it flew to Cairo in what should have been about a 3½-hour flight.

At some point before dropping off radar, the plane swerved 90 degrees to the left and then made a 360-degree turn to the right before plunging first to 15,000 feet, then 10,000 feet, and disappearing from radar, Greek officials said.

What Greek officials described as swerving movements were likely pieces of the aircraft being picked up on radar as they fell from the sky, U.S. officials told CNN.

As of now, investigators have found nothing implicating the flight crew or security officials aboard the plane, the Egyptian official said.

Greece, France, the United States and other nations were searching about 130 nautical miles southeast of the Greek island of Karpathos, Greek aviation officials said.

The European Space Agency said that its Sentinel-1A satellite had spotted an oil slick near where the plane is believed to have crashed. The agency said it's possible the slick could be from another source.

As crews searched, somber relatives gathered in Cairo and Paris airports, seeking word on their loved ones. EgyptAir officials met with families Saturday to explain the lengthy process of identifying the bodies.

The airline said it will take time to retrieve body parts and conduct DNA tests. Families were asked to provide as much information as possible to identify the body parts.

The Egyptian Civil Aviation Ministry has formed an investigative committee for the crash led by Ayman al-Moqadem, the investigator also in charge of the inquiry into the October crash of a Russian Metrojet airliner over the Sinai. That disaster, which killed all 224 aboard, is widely believed to be the work of terrorists.