In plea deal, Russian woman admits to being a secret agent 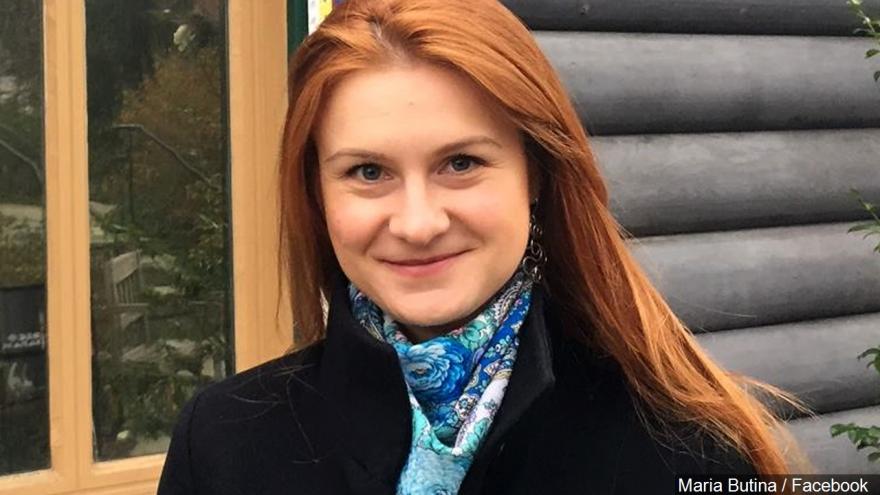 WASHINGTON (AP) — A Russian woman accused of being a secret agent admitted Thursday that she conspired to infiltrate the American gun-rights movement to gather intelligence on conservative political groups as Donald Trump rose to power.

Maria Butina, 30, agreed to plead guilty to a conspiracy charge as part of a deal with federal prosecutors.

The case, which is separate from special counsel Robert Mueller's investigation into Russian meddling in the 2016 U.S. presidential election, has offered insight into how Moscow seeks to influence American policy.

Prosecutors say Butina and her Russian patron, Alexander Torshin, used their contacts in the National Rifle Association to pursue back channels to American conservatives during that campaign, when Republican Trump defeated Democrat Hillary Clinton.

Court documents detail how Butina saw the Republican Party as prime for Russian influence and courted conservatives through networking and contacts with the NRA. She posed for photos with prominent Republicans, including former presidential candidates, and snagged a picture with Donald Trump Jr. at a 2016 NRA dinner.

Butina's case, brought by federal prosecutors in Washington, comes amid a broader push by the Justice Department to enforce U.S. laws governing foreign agents, including those accused of working for Russia.

As part of her deal, Butina pleaded guilty to a single charge of conspiracy to act as an unregistered foreign agent and she agreed to cooperate with investigators.

Prosecutors say it is "very likely" she will be deported from the U.S. after her sentence is completed. The charge carries a maximum sentence of five years in prison, though the defense noted Thursday that federal sentencing guidelines recommend no time to six months. She has been jailed since her arrest in July.

According to her plea agreement, Butina's work was directed by Torshin, a former longtime member of the Russian parliament who until recently was an official in Russia's central bank. He is now under sanction by the Treasury Department for his ties to Russian President Vladimir Putin.

Butina, dressed in green jail scrubs with her red hair pulled into a long ponytail, acknowledged she "sought to establish unofficial lines of communication with Americans having power and influence over U.S. politics." She admitted that her boyfriend, conservative political operative Paul Erickson, helped her as she tried to use his ties with the NRA to set up the back channels. Erickson, who is referred to as "U.S. Person 1" in court papers, has not been charged. His attorney said he is a good American who "has done nothing to harm our country and never would."

In a 2015 proposal she crafted with Erickson's help, Butina argued it was unlikely Russia would be able to exert influence using official channels and, as an alternative, suggested using back channel communications to build relationships with Republicans, according to court papers.

Pushing her travel to the U.S. and her work with the NRA as selling points, Butina argued that she had already "laid the groundwork for an unofficial channel of communication with the next U.S. administration." She asked for $125,000 from an unnamed Russian billionaire to attend conferences in the U.S. and meet with people who she thought may have influence with the Republican Party and sent the proposal to Torshin. He responded by telling her the proposal would "be supported, at least in part," according to court documents.

Torshin also asked Butina to help justify him attending a national NRA meeting in 2016 and Butina encouraged his attendance "partly because of the opportunity to meet political candidates," according to her plea agreement. In addition to attending numerous NRA events, Butina also organized "friendship dinners" in Washington with influential political figures.

In their filings, prosecutors have said federal agents found Butina had contact information for people suspected of working for Russia's Federal Security Services, or FSB, the successor intelligence agency to the KGB. Inside her home, they found notes referring to a potential job offer from the FSB, according to the documents.

Investigators recovered several emails and Twitter message conversations in which Butina referred to the need to keep her work secret and, in one instance, said it should be "incognito." Prosecutors said Butina had contact with Russian intelligence officials and that the FBI photographed her dining with a diplomat suspected of being a Russian intelligence agent.

Butina's lawyer, Robert Driscoll, had previously decried the charges against her as "overblown" and said prosecutors criminalized her mundane networking opportunities. He said Butina was a student interested in American politics and wanted to see a better relationship between the U.S. and Russia.

On Thursday, prosecutors also appeared to have backed off their assertion that Butina's attendance at American University was little more than a cover to enter the U.S. In their filing, prosecutors said "all available evidence" indicated she had a genuine interest in a graduate school education.

Butina had mounted an aggressive defense and tried to have the charges against her tossed. But for several weeks, Butina's lawyers and federal prosecutors had indicated in court papers that they were working toward a resolution in the case.

After Butina's plea, a senior Russian lawmaker said he was convinced that Butina had caved and was pressured to confess. Leonid Slutsky, chairman of the State Duma's foreign affairs committee, told Russian news agencies that the charges against Butina had been trumped up and that she fell victim to what he called "political inquisition."

"They broke her down. Anyone would break down in circumstances like that," he said, referring to Butina's time in prison, which included being held in administrative segregation.

Butina told the judge on Thursday that she was pleading guilty of her own volition and was not pressured, threatened or coerced.