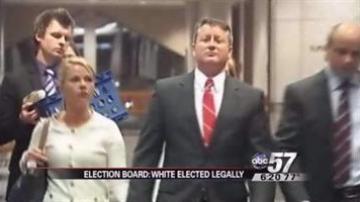 INDIANAPOLIS -- Indiana may have a new Secretary of State this week!

But it's not likely to be the runner-up from the 2010 election!

On Thursday, the State Supreme ruled that Former Secretary Charlie White was legally elected in 2010.

The State Democratic Party challenged White's eligibility due to allegations of voter fraud.

White was charged and convicted last month, but the ruling ends the Democrats' attempt to get their candidate into office.

"Well, this wasn't about Charlie White. This was about making sure that the person who is Secretary of State really could abide by the laws," said Vop Osili, the runner-up candidate.

Gov. Mitch Daniels said he would not name White's successor, but expects to announce his choice very soon.