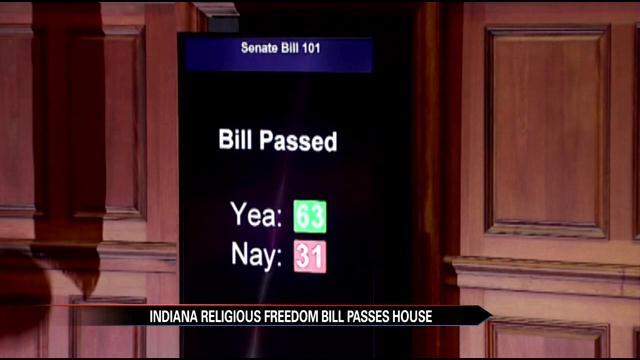 A controversial religious freedom bill in the state of Indiana has made one more leap toward becoming state law.

Senate Bill 101 passed the Indiana House on Monday and would allow businesses in Michiana to deny service to a customer based on personal religious beliefs.

There are still a few hoops it will need to jump through before it would take effect.

Some small changes made to it Monday will send it back to the senate Tuesday morning for a vote, where it is expected to pass and head right to Governor Mike Pence's desk.

The religious freedom restoration act passed 63-31 with the help of local Republican representatives Tim Wesco of Osceola, Wes Culver of Goshen, Timothy Harmon of Plymouth and Dale Devon of Mishawaka.

South Bend's democratic representative was excused from the vote.

Backers say it prevents business owners from compromising their religious beliefs, like in the case of a baker making a cake for a same-sex marriage.

But opponents, like the organization Freedom Indiana, say this opens the doors to discrimination based on race, gender and sexual orientation.

Governor Pence has issued a statement saying he looks forward to signing this bill into law once it reaches his desk.