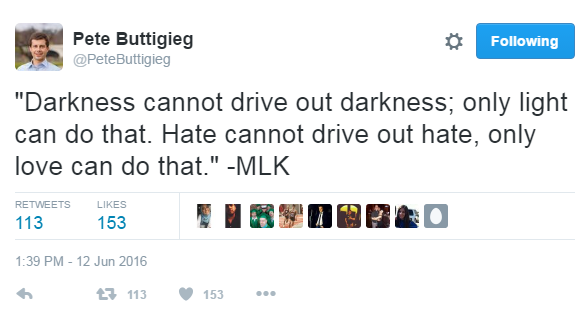 Many political figures have responded to the recent terror attack in Orlando including the South Bend Mayor and Indiana Senators.

South Bend Mayor Pete Buttigieg, who has openly come out as a member of the gay community, responded to the attack by tweeting Sunday.

“Safety and acceptance will win over fear and hatred. May our response to Orlando help us get there sooner rather than later,” Mayor Buttigieg said.

Indiana Senator Joe Donnelly also reacted to the terror attack in Orlando with a tweet that read, “The shooting in Orlando was tragic and heartbreaking. While authorities investigate this attack we mourn those who lost their lives and thank the first responders.”

Indiana Senator Dan Coats responded to the mass shooting in Orlando as well on Sunday.

“I am saddened by the tragic news in Orlando this morning. Thinking of those who lost a loved one to senseless violence,” Senator Coats tweeted.

President Obama and Governor Mike Pence have ordered flags to be flown at half staff at state facilities to honor the victims of the terror attack. Flags should be flown this way until sunset on Thursday, June 16.

Governor Mike Pence issued a statement Sunday in response to the attack saying, “Karen and I are shocked and saddened by the senseless act of terror committed in Orlando this morning. On behalf of the state of Indiana, we extend our prayers to the victims, their families, and the Orlando community. Today’s horrifying news stands as a grave reminder that we live in dangerous times and the war on terror continues.  For this reason we must commit to ensuring the safety and security of our people.”

A Go-Fund-Me account has been set up to help the families of the victims. To donate, click here.

Stay with ABC 57 for the latest developments on the terror attack in Orlando.