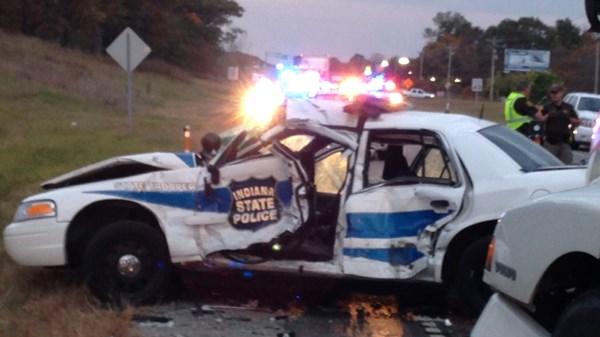 An Indiana State Police trooper was seriously injured when his patrol car was struck by a semi.

According to the ISP, Trooper Brant Goubeaux, 25, was traveling westbound on State Road 10 when he went off the side of the road to the right, turned on his emergency lights to make a u-turn to go eastbound after a violator.

A semi pulling a trailer loaded with 20,000 pounds of empty wooden spools was also westbound when Goubeaux made a u-turn in front of him.

The driver was unable to avoid the patrol car and struck it in the driver's door. Both the car and the semi came to a rest in the eastbound lanes.

Goubeaux had to be extricated from his patrol car. He was airlifted to Advocate Christ Hospital in Oak Lawn Illinois with serious, non-life threatening lower extremity injuries.