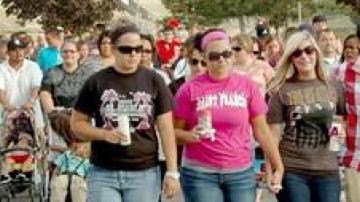 ABC News- A memorial service will be held today for the victims of a stage collapse at the Indiana State Fair that killed five people, as some of the 40 who were injured fight for their lives in hospitals.

The nightmarish scene took place Saturday night at the Indiana State Fair in Indianapolis, when winds of up to 70 mph blew down thousands of pounds of steel scaffolding, wooden beams, lighting, sound and other equipment of an outdoor stage down as 12,000 people waited for a Sugarland concert.

The five people killed include: 42-year-old Tammy Vandham of Wanatah, Ind., who was excited to see Sugarland, one of her favorite bands; Glen Goodrich a 49-year-old father of two from Indianapolis; and Nathan Bird, a 51-year-old stagehand who was on top of the rigging when it fell. On Sunday night vigils were held for victims 29-year-old Christina Santiago of Chicago and Alina Bigjohny of Fort Wayne, Ind., who was 23.

Others still fighting for their lives include a 5th grader identified only as "Jade." The girl's family issued a statement "to thank those who have been praying for her and ask them to continue praying."

The state fair will be open again on Monday for the first time since the incident, with Gov. Mitch Daniel attending a morning memorial service there to remember the five that died.

Indiana State Police have said that number of injured could rise, given that some might have been transported privately for emergency care, rather than in ambulances ordered by rescue workers.

Daniels said the wind gust was a "fluke" that no one could have anticipated. Rain had been in the forecast, but not the sudden high winds that damaged the stage.

"In Indiana the weather can change from one report to another report and that was the case here," State Police Sgt. Dave Bursten said.

But some of the people who were there said they aren't so sure.

"There should have been warning the storm was coming," one witness said. "You could tell the sky was getting really dark off to the left."

The crowd had been warned that thunderstorms were approaching and that they might have to evacuate. But the same announcer said concert organizers hoped the show would go on, so many stayed put.

Two minutes later, just before 9 p.m., it was too late.

"The funnel cloud came in and all of a sudden it started twirling around and the next thing I knew, I looked over my shoulder and the stand started coming down," witness Jay Keiser said.

The fair was closed Sunday as OSHA and the state fire marshal investigated, looking into how safely that steel scaffolding was constructed.

Daniels and police officials today praised the hundreds of people who rushed to help when the stage came down.

While many people fled as the massive structure fell under the force of the winds, hundreds rushed to help the victims, many trying to lift the stage to free people trapped underneath.

"You had law enforcement, you had citizens, you had people jumping into lift pieces of equipment off the injured and the people who were killed in this tragic accident," Bursten said.

The governor said those people exemplify for him the Hoosier spirit.

"The individual Hoosiers who ran to the trouble, not from the trouble, by the hundreds, offering their, in many cases their own professional skills," Daniels said. "It's the character that we associate with our state, people don't have to be paid to do it."

This section of Indiana is known as a tornado alley. In April 2006, tornado-force winds hit Indianapolis just after thousands of people left a free outdoor concert by John Mellencamp held as part of the NCAA men's Final Four basketball tournament.

ABC News' Dean Schabner and The Associated Press contributed to this report.