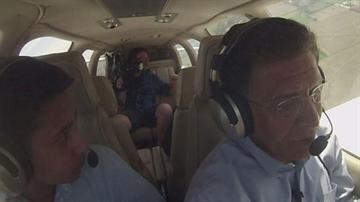 (CNN) -- It was supposed to be the trip of a lifetime. An aerial endeavor that would take 17-year-old pilot Haris Suleman and his father, Babar, around the world in just 30 days and into the record books.

The journey, months in the planning, would take the pair on a 26,500-mile odyssey, with 25 stops planned in 15 countries. The aim was to raise funds for a charity in Pakistan that helps poverty-stricken children go to school.

Instead, the American teenager is now confirmed dead and his father is missing after their plane crashed into the ocean off American Samoa on Tuesday night.

Haris had been due home in Indiana on Saturday, his sister Hiba Suleman told reporters Wednesday.

His body has been recovered, she said. But their father, also a pilot, has not been found.

"We're hoping my dad is alive and well, and we're going to keep praying until we have a definitive answer," Hiba Suleman said.

She told reporters the plane was about 23 miles from the island when it crashed. Her father wouldn't have let Haris take off if the weather was bad, she said.

It is unclear why the plane crashed or why the duo took off at night.

In an interview with CNN affiliate WISH TV last month, only days before the pair set off, Haris appeared excited as he outlined their itinerary -- which if completed in 30 days in their single-engine plane would have made him the youngest pilot to achieve the feat.

He also told how he and his father had received survival training in case of having to ditch their plane in the water.

Babar Suleman, asked about the inherent risk involved in such a venture, said he put his faith in sound preparations.

"In all these endeavors, the biggest part of the whole thing is the planning," he said. "While he was training and getting his license, I was busy planning all the different segments, all the different fuel stops, different cruise profiles. I set up all of the plans and he will do all the execution."

The record-breaking attempt, he said, "has been on my bucket list forever."

Babar Suleman also spoke of the importance of the work done by the Seeds of Learning charity, an Indiana group which supports the work of the Citizens Foundation in Pakistan.

The money raised, he said, would help open schools "for underprivileged children who otherwise would not have a hope of getting an education and may even end up in the wrong hands."

He expanded on his charitable motivation for the trip in his blog, Around the World in 30 Days, explaining how in the wake of the September 11, 2001, attacks in the United States he had come to the conclusion "that lack of proper education contributed to the events of that day."

The work of the Citizens Foundation to provide education to thousands of impoverished Pakistani children is, he said, "the noblest of all causes."

The last entry on the blog is posted from Bali, Indonesia.

The principal of the high school where Haris was a rising senior said the school was deeply saddened by his death.

"Haris' adventurous spirit and huge heart led him to reaching for this personal goal while also seeking to raise funds and awareness for schools supported by The Citizens Foundation, a nonprofit organization headquartered in Karachi, Pakistan," said Melvin Siefert, principal of Plainfield High School.

A soccer coach at the school told the Indianapolis Star that Haris was a great student and a talented player.

"Haris loved to joke a lot," David Knueve told the newspaper. "He just got the team sort of laughing at the right moments."

His sister said Haris planned to be an engineer like his father.

The oldest sibling, a brother, was trying to get from London to American Samoa to pick up Haris' body but there were only a few flights, Hiba Suleman said.

A Coast Guard spokeswoman, Petty Officer Melissa McKenzie, said a plane would aid in the search for Babar Suleman.

He and Haris were wearing "gumby" suits that could help them survive a water landing, Hiba Suleman said. She said they had taken a course in how to survive a crash in the ocean.

They also had life rafts aboard.

The next legs of the trip were supposed to cross the Pacific Ocean, with stops in Kiritimati (also known as Christmas Island) and Hawaii.

The plane has yet to be recovered, but emergency beacons were sending out signals.

The National Transportation Safety Board said the plane was a Beechcraft Bonanza A36.

CNN's Mayra Cuevas and Stella Chan contributed to this report.