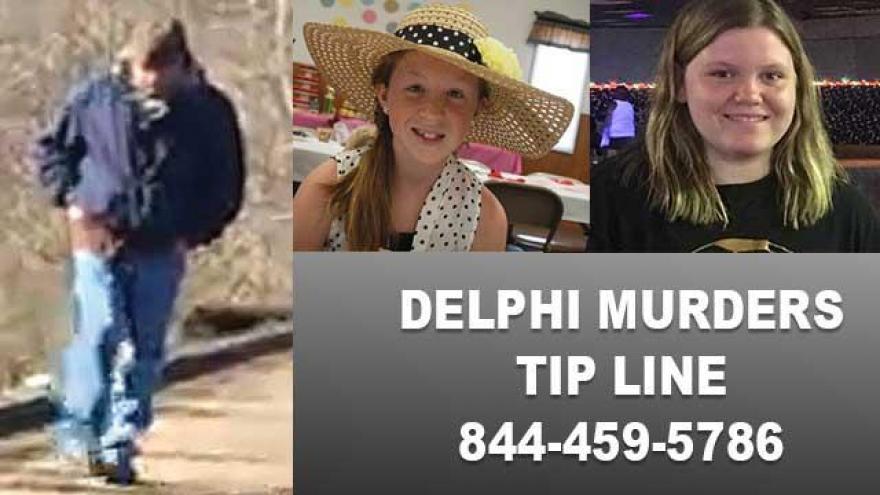 On Monday February 13th, 14-year old Liberty German and 13-year old Abigail Williams were dropped off at a trail near Monon High Bridge. They were reported missing hours later after they failed to meet up with a family member. Their bodies were found a day later along a railroad bridge near Deer Creek.

Indiana State Police released a picture of a man who was walking on the trail around the time the girls disappeared. Authorities say the unidentified man is now a suspect in their deaths.

“Look at this poster, someone knows who this individual is, the poster in front of you, family member, neighbor. Is it an acquaintance? Is it an associate? Or maybe that one guy that lives over that one place that's not right?" said Douglas Carter, ISP Superintendent.

Police on Wednesday said the source of that photo was a video German had taken on her cell phone.

Officials also released audio of a male voice saying the words "down the hill," in the hopes the public might identify the suspect's voice. [Listen to the audio here]

"There's enough there that somebody could recognize somebody's voice," said Captain Dave Bursten, the chief public information officer for Indiana State Police. “If you hear this and think that sounds like fill in the blank call us, make the anonymous tip."

Bursten praised German for turning on her video camera.

“This young lady is a hero, there’s no doubt, to have enough presence of mind to activate the video system on her cellphone to record what we believe is criminal behavior," Sergeant Tony Slocum of the Indiana State Police said.

Officials want anyone with information to call their tip line, and said there was a reward of as much as $41,000.

Special Agent in Charge Greg Massa of the FBI spoke of behavioral changes that should be called in to the tip line.

Carroll County 9-1-1 dispatchers are handling all of the calls coming into the tip line regarding the investigation. Dispatchers say since the number was set up, they’ve received more than 1,000 calls.

In the wake of this tragedy, there has been an overwhelming amount of love and support for the two girls and their families. Since they initially vanished, the community has done everything they can to get through this difficult time together.

The trail where these girls disappeared now has the community concerned. They’re questioning their own safety and now there is a possibility that security within the area will be boosted.

“We are just about to put some cameras in our canal park anyway through a grant that we got last fall, so maybe we can put all this into one system which could also be accessed by police,” said Dan McCain, President of the Wabash and Erie Canal Association.

The Stonehouse Bakery is making large cookies in honor of Abigail and Liberty. The proceeds will go to their families.

CNN contributed to this report