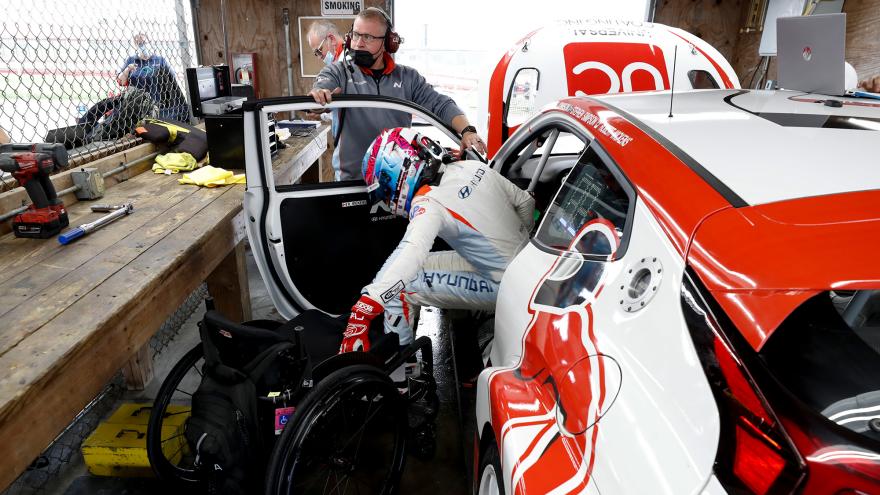 Robert Wickens climbs into a race car for the first time since his 2018 accident. Photo: LAT/USA
Originally Published: 08 MAY 21 17:01 ET
By Rachel Trent, CNN

(CNN) -- IndyCar Series driver Robert Wickens has experienced a lot in the past three years: a paralyzing crash in 2018, regaining strength to have his first dance at his wedding in 2019, and returning to the racetrack -- virtually -- in 2020. Now, in 2021, he has just driven a real race car for the first time since his accident.

The August 2018 crash came just months into Wickens' IndyCar Series debut. At Pocono Raceway in Pennsylvania, the Canadian's Dallara-Honda flew through the air, hit the outside safety barrier, then went into a series of violent spins before falling into the path of oncoming drivers.

Wickens, now 32, says he doesn't remember the accident, which may be why he had no hesitation when given the opportunity to get back behind the wheel of a race car.

Wickens drove the #54 Hyundai Veloster N TCR with Bryan Herta Autosport. Equipped with hand controls for acceleration and braking, it is normally driven by Michael Johnson, a race-winning paralyzed driver.

Wickens took it for a spin at Mid-Ohio Sports Car Course in Lexington, Ohio, on Tuesday. It was the last track Wickens raced on before his accident.

"I have very fond memories here, so it's actually pretty fitting that I get to return to a race car on the same track that I finished my last race on," Wickens told CNN.

He said being back in the driver's seat felt a little foreign, especially with the hand controls, but he said he had a blast.

"I was really excited (in) the days leading up to it. Then as soon as I woke up this morning, it's almost like back to work, ready to do what I've been meaning to do for a long time," he added.

He's still recovering from the serious spinal injury, which paralyzed him from the chest down. While he's made progress and now has the ability to stand up, his mobility is still limited. But Wickens said he's getting stronger every day.

"I'm a bit of a perfectionist when it comes to my work and this industry and recovery -- I treated it no differently," he said. "My theory was, if it was two hours of pain and hard work for a lifelong of more mobility and myself, then I would take that every time."

Wickens said although he's eager to race again, he's taking things day by day, and he had fun driving just for the sake of it.

"The great thing about today is that I can do just do this for me," he said. "It's not every day you get the opportunity to have a track day like this where you can just, no pressure, just drive for yourself and drive really for the fulfillment of accomplishing something that you wanted to achieve. And you can only do that with great people around you."