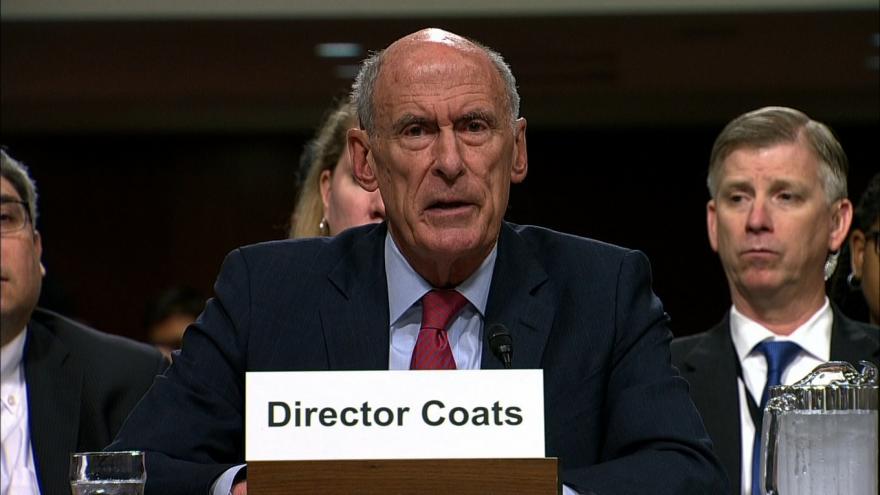 (CNN) -- Two US intelligence agency chiefs refused to say on the record Wednesday whether President Donald Trump asked them to downplay investigations into whether there was collusion between Russia and Trump's presidential campaign last year.

When asked by Republican Sen. Marco Rubio of Florida during a Senate intelligence committee hearing, "Are prepared to say you have never been asked?" Director of National Intelligence Dan Coats and National Security Agency Director Adm. Mike Rogers declined to answer.

"I am not prepared to go down that road right now," Coats said. Rogers referred to earlier statements he made saying he wouldn't comment on conversations with the President.

Both men said they have never felt pressured from Trump's administration to intervene in investigations into Russian meddling into the US election, contradicting reports that the President had previously asked them to downplay the probe.

"I have never felt pressured to intervene in the Russia investigation in any way," Coats told members of the Senate intelligence committee when asked about such reports.

Coats also responded to one question about the reports by saying he would answer questions during a closed hearing. A follow-up session behind closed doors is scheduled for Wednesday afternoon.

"I am not going to discuss the specifics of interactions that I may or may have not had with the President," Rogers said, adding he has never felt pressured to do anything unethical. "I do not recall feeling pressured to do so."

Four top intelligence officials are fielding questions Wednesday on whether Trump intervened into the Justice Department's investigation into Russian interference in the US elections, the latest development in a tumultuous 24 hours.

Coats' testimony before the Senate intelligence committee has been scheduled for weeks, an event that was already expected to kick off two days of blockbuster hearings. But a report in The Washington Post that Trump went further than just asking Coats to rebut former FBI Director James Comey in public increases the intrigue.

The latest report adds to questions of whether Trump interfered in the Russia investigation, just one day before Comey is set to testify on Trump's request that he end his investigation of former national security adviser Michael Flynn.

"If any of this is true, it would be an appalling and improper use of our intelligence professionals -- an act that could erode the public's confidence in our intelligence institutions," ranking Democrat on the committee, Sen. Mark Warner of Virginia, said in his opening statement. "The (intelligence community) fiercely prides itself on its apolitical service to the country. Any attempt by the White House or even the President himself to exploit this community as a tool for political purposes is deeply, deeply troubling."

It's a new twist for a hearing Wednesday that was set to be dominated by questions about the Russia investigation. Deputy Attorney General Rod Rosenstein is set to testify for the first time in public since he appointed Robert Mueller as special counsel in the Russia probe, and Rogers is facing questions of whether Trump asked him to rebut Comey in public.

Rogers repeatedly declined to directly address questions about whether Trump pressured him to downplay any investigation into Russian collusion with his presidential campaign.

DNI spokesman Brian Hale said in advance of the hearing, "Director Coats does not discuss his private conversations with the President."

"However, he has never felt pressured by the President or anyone else in the Administration to influence any intelligence matters or ongoing investigations," Hale said in a statement.

Acting FBI Director Andrew McCabe is also scheduled to testify. Trump announced his long awaited decision for his nominee to be the permanent replacement -- Christopher A. Wray -- in a Tweet Wednesday morning.

The only silver lining for the Trump White House may be the formal focus of the hearing: re-authorization of legislation that allows for surveillance of foreign officials, an issue at the center of Trump's own tweets against the Russia investigations.

The Trump administration scored a victory this week when it arrested a 25-year-old NSA contractor, Reality Winner, and charged her with espionage for allegedly leaking an NSA report showing Russian interference in the election.