Investigators are piecing together details of deadly Amtrak train crash 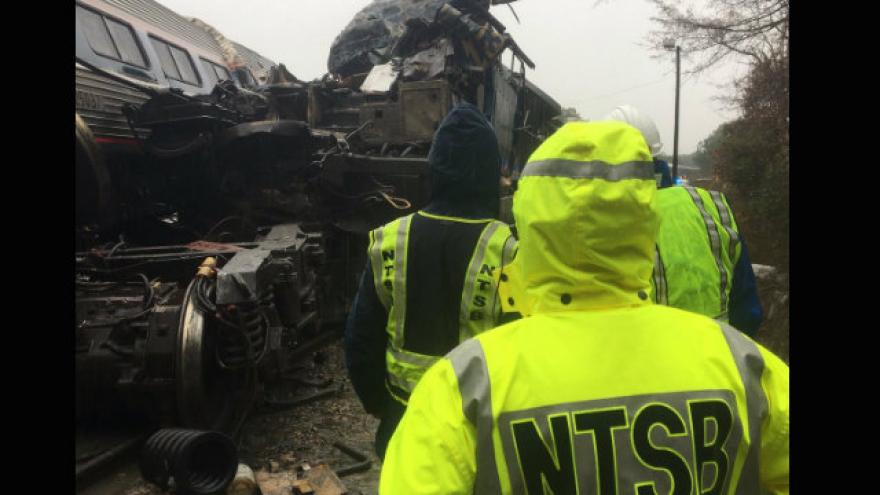 Amtrak Train 91 was traveling between New York and Miami with when it collided with a CSX freight train in Cayce, South Carolina, derailing the lead engine and some passenger cars, Amtrak said in a statement. Photo courtesy NTSB 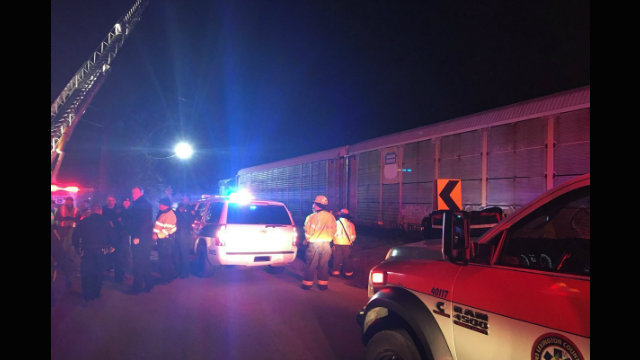 (CNN) -- An Amtrak train inadvertently diverted to a side track traveled for 659 feet before colliding head-on Sunday with a freight train at 50 mph in South Carolina, federal officials said Monday.

Two Amtrak employees were killed and more than 100 people injured when the Amtrak train collided with the stationary CSX freight train around 2:35 a.m.

The passenger train's engineer sounded the horn and seconds later slammed on the emergency brake before the crash, said Sumwalt, who revealed details of the first day of the investigation, including preliminary information from the Amtrak train's event data recorder, which was recovered intact.

Seven seconds before the recording ended, the train's horn was activated for three seconds, Sumwalt said. The train's speed then was 56 mph, 3 mph below the limit, he said.

Investigators are still trying to determine whether the horn was activated before or after the train was switched to the side track, Sumwalt said.

"I will say, that an engineer, part of his duties, is as they're going down the track, is to look at the switch points, to see which way this is lined," Sumwalt said. "And If an engineer saw that switch is lined for something other than it should be, they should notice that."

The brake pipe pressure began decreasing, indicating the brakes were being applied, five seconds before the end of the recording, Sumwalt said. At that point, the speed was reduced to 54 mph when the throttle was moved from full to idle. Two seconds later, the emergency brake was applied, Sumwalt said.

"When the recording ended, the train speed was 50 mph and it resulted in a head-to-head collision between the two trains," Sumwalt said.

Sumwalt said the recording of the video at the front of the Amtrak passenger train, which was recovered on Sunday, ended seconds before the collision. So, engineers are trying to forensically recover information other ways, he said.

The Miami-bound Amtrak 91 train was traveling south early Sunday and should have continued straight down the tracks but the rail switch had been manually set to divert the train onto the track where the CSX train was parked, Sumwalt said Sunday.

A padlock held the switch into its alignment, which is the standard procedure when switches are manually operated, Sumwalt said Sunday.

Investigators are looking into why the switch was aligned that way, among other things, according to Sumwalt.

He said investigators tested the switch and found "no exceptions" to its operation, he said.

The signal system along the section of the track was down and tracks were being manually controlled by CSX, according to Richard Anderson, Amtrak CEO and president. He said the CSX dispatch center directed the Amtrak train to the track where the derailment happened.

Hours after the crash, Sumwalt said the collision could have been avoided if positive train control -- a system that combines GPS, wireless radio and computers to monitor trains and stop them from colliding, derailing or speeding -- had been in place.

"It's our understanding that they were performing upgrades to the signal system to get it ready for positive train control," Sumwalt said Monday.

Investigators are expected to be at scene through the weekend, Sumwalt said.

The NTSB investigation should take 12 to 18 months, Sumwalt said.

Sunday's accident was one of several fatal accidents involving Amtrak trains in recent weeks. The circumstances of each accident vary.