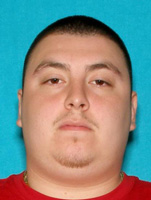 ST. JOSEPH COUNTY, Ind. -- During a press conference at the Metro Homicide Unit, investigators released the name and photo of a suspect in the death of Benito Estevan Bueno, who was shot outside Bar Louie early Sunday morning.

Mishawaka Police responded to the mall around 2:40 a.m. because of a fight outside the restaurant.

When the officers arrived, they located Bueno with gunshot wounds. He was pronounced dead at the scene.

Investigators interviewed several witnesses and learned before the shooting Bueno was at Bar Louie with several friends and Miguel Rosales was there with his friends.

During the evening, there was tension between the two groups and Rosales and Bueno and their friends got into a heated discussion, according to the probable cause affidavit.

When they did, Bueno was confronted by Rosales and two of his friends, according to the probable cause affidavit.

Then Bueno and Rosales got into a fight that went into the parking lot.

At one point, a gun was pulled out and Bueno and Rosales struggled for the gun, reports said.

Two friends of Rosales pulled Bueno away from Rosales and held him, reports said.

Rosales and his friends left the scene before police arrived, according to police.

Rosales is facing one count of murder.

If you have any information about Rosales' whereabouts, please contact the CMHU, or Crime Stoppers at 800-342-STOP.