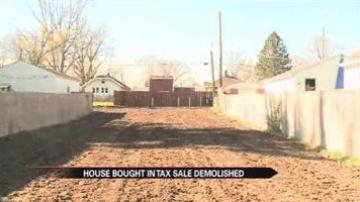 Every year, the city of South Bend sells vacant and dilapidated homes at a tax sale. One investor is angry because the home he bought was torn down.

Dan Mullins lived in South Bend for 22 years, then moved to Florida about 10 years ago. He said he still invests in South Bend real estate because he wants to help out his old hometown.

Mullins asked a friend to check on a house he purchased since he lives out of town.

"They had already demolished the property and the house was gone and basically there's a hole that they're filling in now,” said Tod Rorie, Mullins’ friend.

The house on O’Brien Street was demolished Thursday.

Then investors, like Mullins, can buy the properties to fix-up and possibly resell.

It's a win-win because it helps the city clean up the eyesores and investors make money.

But Mullins' attorney says the system needs to be fixed.

"There is no collaboration between where you are purchasing the property at tax sale- that entity- and code enforcement. They don't work together and they should,” said Vince Campiti, Mullins’ attorney.

Mullins bought the home at a tax sale in February. He says he had intended to fix the place up.

Mullins was shocked the city would add the home to the demo list only a few months after he bought it.

Code enforcement said Mullins had a chance to make repairs, but failed to communicate.

"Here's a gentleman that wanted to invest in property in good faith, wanted to clean it up wanted to use it as rental property and instead he was given a burden,” said Campiti.

The code enforcement director said the city can’t wait forever for investors to repair their property and that Mullins, who is in the home restoration business, should have known that.