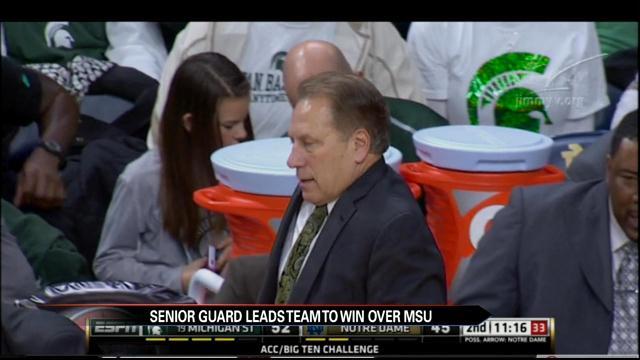 It was a big night for the Notre Dame men's basketball team. The Irish improved to 7-1 after a big overtime win Wednesday night over (19) Michigan State. And a big factor could have been the return of a formerly suspended star.

Irish guards Jerian Grant and Demetrius Jackson were hot, putting up a combined 49 points. 27 of those points came from Grant--a career high for the senior.

"Its great to know that we can play with a team the caliber of Michigan State," said Grant

Last year in their inaugural season in the rigorous ACC conference, the Irish went 15-17 without Grant, who was suspended in December due to an academic issue.

He was averaging nearly 20 points a game at the time.

Now he is back on the court and fueled by the teammates around him.

“Just guys giving me confidence," said Grant. "Telling me to make plays for our team. When guys give you confidence like that it is easier to go out there and play.”

“Amazing guy, a clutch guy," Notre Dame head coach Mike Brey said of Grant. "He takes some bad ones but you have to ride with him. He makes some plays. And you can't fault because man does he want the ball when his team wants to win.”

The opposing coach on the sideline had some great words for Grant as well. Tom Izzo said the senior is a pro player and is "as complete a guard as we have played against."