Irish ready to battle it out against UNC 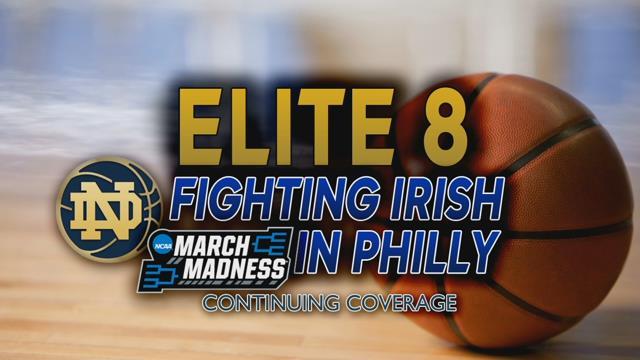 A big story in March is the battle on the hardwood since the Fighting Irish are looking for a spot in the Final Four. This would be their first since 1978.

ABC 57 traveled to Philly for a preview of Sunday night’s match-up against North Carolina.

A tough opponent for the Irish, the top-seeded Tar Heels put up over 100 points against Indiana just two days before this game.

If the Irish are looking to upset U.N.C., it will start on the defensive side of the ball.

“You do everything you can to take the three away. Force them to take a bunch of two's. They will, because they got a bunch of big guys that excel. And on the other end, they're gonna have to shoot the ball very well - much better than they did against Wisconsin,” said Tim Prister of Irish Illustrated.

The Irish shot only 26% in the first half against Wisconsin, scoring a season low 19 points. To beat the top-seeded Tar Heels, they know a slow start will be hard to overcome.

“We gotta play well for 40 minutes. Even in the game we won in South Bend, we only played well for 20 minutes. A great team like them, we may not be able to come back like we have against other teams in this tournament,” said junior Irish Forward, V.J. Beachem.

After a 31 point loss to North Carolina in the ACC Tournament on March 11th, the Irish are focused on making adjustments.

“That's huge for us to remember that game and even the first one, look at what we did. What worked, what didn't work. That's our program. Learning, making adjustments, just realize what we need to do better,” said Irish sophomore Guard, Matt Farrell.

“I think at the end of the day it comes down to effort. They know our plays, we know some of their plays, who's willing to dig in and get defensive stops,” said Irish junior Guard Demetrius Jackson.

“Limiting their second chance opportunities - we have to play defense - and can't have one mistake lead to another,” said senior Forward, Zach Auguste.

The Irish will bank not only on their defense but on their experience and the belief they have in their locker room as they take the floor tonight.

“We were standing here last year in the game against Kentucky saying no way Notre Dame wins that game. I'm hearing a lot of that said. I still think North Carolina wins that basketball game, but I wouldn't put anything past Mike Brey, other than Brey participating in the game on the court. Cause he's a little banged up,” said Prister.

A little humor from Tim, Coach Brey will be on the sidelines tonight albeit in a walking boot still healing from the leg injury.

But a tough team with a tough test against a familiar foe tonight – Notre Dame and U.N.C. tip off just before 9:00 p.m. Sunday night.