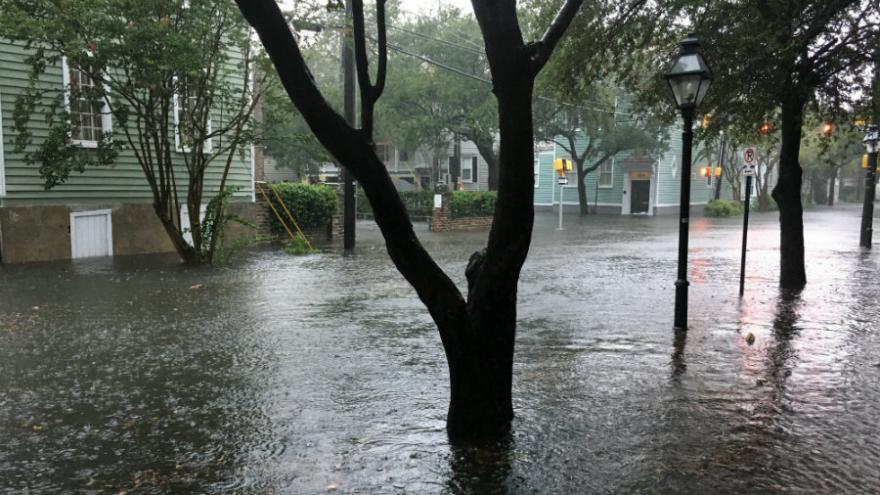 (CNN) -- Editor's note: This is a developing story that is being constantly updated as the storm progresses. Also, follow our live updates here.

Two storm-related deaths were reported in Georgia, where Irma uprooted large trees. A South Carolina man was killed by a falling tree limb.

The tropical storm, which stretched about 650 miles east to west, was affecting at least nine states, causing rain from eastern Mississippi to the Carolinas.

"In terms of the heaviest rain, it's covering much of Alabama, Georgia and the Carolinas," Ward said.

The rain and winds were expected to last through the night. Parts of coastal Georgia and South Carolina were under a storm surge warning.

The center of the storm was moving toward Alabama late Monday. Irma moves to Tennessee later Tuesday before fizzling out later this week.

-- Irma continued weakening Monday evening as it moved through northern Georgia, the National Hurricane Center said. As of 8 p.m. ET, Irma was centered about 120 miles south of Atlanta, with maximum sustained winds of 45 mph.

-- A 57-year-old South Carolina man was fatally hit by a falling tree limb during Tropical Storm Irma, Abbeville County Coroner Ronnie Ashley told CNN. The man was cutting downed limbs with a chainsaw outside of his home when he was struck.

-- Two people died in Georgia: A 62-year-old man who was on his roof was killed in Worth County, which experienced wind gusts of 69 mph, according to Kannetha Clem, a spokeswoman for the Worth County Sheriff's Office. Another man was killed in Sandy Springs, an Atlanta suburb, when a tree fell and "literally cut the home in half," according to Sharon Kraun, communications director for the city.

-- About 6.5 million electric customers are without power in Florida, according to Floridadisaster.org. FEMA chief Brock Long has said some places won't have electricity for weeks.

-- More than 1.4 million customers in Georgia were without power, according to Georgia Power and Georgia EMC.

-- In South Carolina, nearly 200,000 customers were without power, according to utility companies.

-- Storm surge warnings in Florida, Georgia and South Carolina mean "there is a danger of life-threatening inundation," the hurricane center said.

Jacksonville grappled with a record storm surge and immense flooding. The city's Memorial Park has turned into an unrecognizable lake.

"We have very serious, significant river flooding along the banks of the St. Johns River. It's bad now, it's going to continue to get worse," meteorologist Angie Enyedi said. "We've already surpassed historic levels, the levels will continue to rise."

In one Jacksonville yard, Irma snapped a tree near its roots, sending it crashing onto the car of an evacuee from South Florida.

No one was hurt. The tree at the end of Kristine Garcia's driveway, luckily, didn't fall on her house.

"We're definitely shaken up. We were in shock when we went outside," Garcia, 34, told CNN. "If it would have fallen toward our direction, it would have been a .... mess."

The storm was still hurling violent winds, pummeling cities in northeast Florida that had not expected to feel its full wrath.

Emergency workers in Daytona Beach rescued 25 people with a high-water truck after they were suddenly caught in an onslaught of wind and rain.

Another 125 emergency rescues were made in less than an hour in Orange County, home to Orlando -- an inland city to which many coastal residents had evacuated before the hurricane.

No electricity or safe water

Irma devastated much of Marco Island, off the southwest coast of Florida, leaving it with no electricity or clean water.

Roommates Zack Forrest and Krock Indigo rode out the storm on the island and likened Irma to a relentless tornado. "The storm was really intense, it was like a tornado that lasted for an hour and a half," Forrest said.

By the time Irma finished with Marco Island, she left 15 homes that have either lost their roofs or suffered other severe damage, the fire department said.

The good news is that there were no major injuries, said Marco Island Fire Chief Mike Murphy

"We were the little engine that did it," he told CNN's Ed Lavandera.

The eye of the storm hit the small fishing village of Goodland, located at the southeast corner of Marco Island.

Extent of devastation not entirely clear

Irma made landfall on the Florida Keys as a Category 4 hurricane Sunday, but the full extent of the damage there is still unknown.

That's because some islands are extremely difficult to access. Southbound US Route 1 -- the only road connecting the Keys -- is closed, Florida Keys spokesman Andy Newman said.

Large debris is blocking access, and a 150-foot stretch "has some buckling," Newman said.

On top of that, "there is currently no cell service, no electricity and no water" in most of the Keys, said Monroe County Commissioner Heather Carruthers.

"We are dealing with satellite phones and those landlines that are working to try to get information out," she said.

'It's the worst storm I've ever seen'

Irma plowed into Georgia and toward other parts of the Deep South -- Alabama, Tennessee and the Carolinas. But that doesn't mean all Floridians should try to go back home.

"Stay off the roads, stay off the streets, let us complete our assessment, clear the roads of water, power lines, trees and then you can get out there and determine what happened to your individual property or your neighborhood," said Fort Lauderdale Mayor Jack Seiler.

The massive storm triggered evacuation orders for 5.6 million people before it made two landfalls in the state Sunday.

The first was over the Florida Keys, and the second, over Marco Island, left the island without water and power, authorities said. "It's the worst storm I've ever seen," said Bill South of the National Oceanic and Atmospheric Administration.

Before slamming into to the United States, Irma hit Cuba late Friday as a Category 5 hurricane.

On Monday, Cuban state TV announced 10 hurricane related deaths -- meaning Irma killed a total of 36 people in the Caribbean before heading to the US.