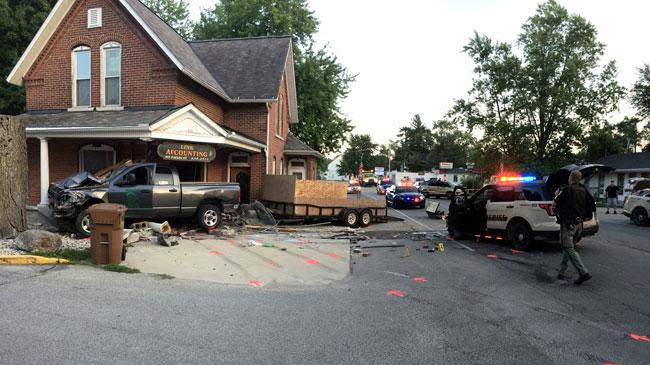 The Indiana State Police released the names of the people allegedly involved in the road rage incident and officer involved shooting in North Webster Wednesday evening.

Around 6 p.m., police received a 9-1-1 call regarding a possible road rage incident that started near the railroad tracks on SR 13 in Syracuse.

The incident between a Dodge pickup and GMC Yukon continued for ten miles into the town of North Webster.

The person driving the pickup, later identified as 24-year-old Alexander D. Jackson of Milford, was allegedly firing shots at the occupants of the Yukon.

A short time later the deputy was involved in a crash at the intersection of Main and Huntington streets with Jackson’s pickup. The force of the crash sent Jackson’s truck into a building.

As the deputy approached the truck and driver, the encounter led the officer to discharge his weapon Jackson. Jackson was shot one time, police said.

The facts and circumstances surrounding the shooting and damage to McCune’s police vehicle are being investigated, ISP said.

Jackson was hospitalized for a gunshot wound and injuries he received in the crash. His current condition is unknown.

Deputy McCune was taken to the hospital where he was treated and released for injuries he received in the incident.

The driver of the GMC Yukon that was being chased by Jackson has been identified as Nathaniel K. Boyer, age 25, of New Paris. Boyer and his passenger were not injured.

The investigation is expected to take several weeks before the completed case will be turned over to the Kosciusko County Prosecutor’s Office, according to ISP Sgt. Trent Smith.