Ivanka Trump arrives in Berlin to work on special relationship 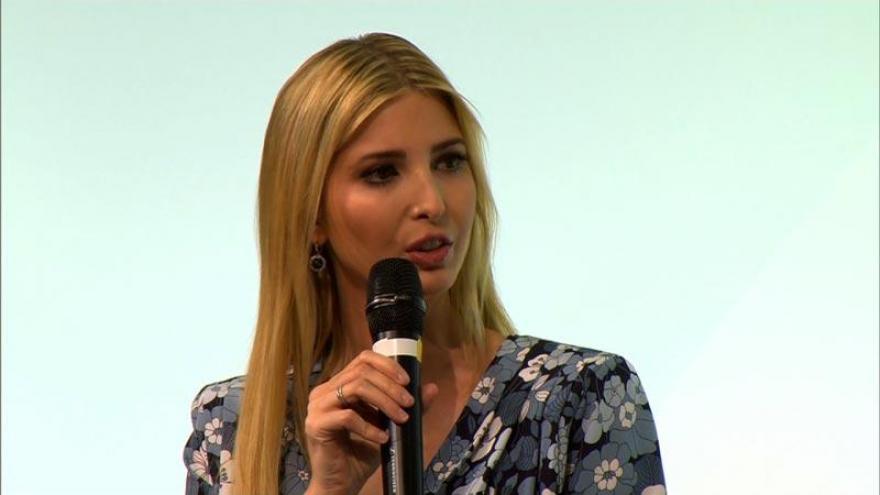 BERLIN (CNN) -- It could be the beginning of a beautiful friendship, after all.

In the wake of a mid-March White House visit characterized by awkward moments -- President Donald Trump apparently declined to shake German Chancellor Angela Merkel's hand in the Oval Office and he made an uncomfortable joke about wiretapping on live television -- his most trusted adviser, daughter Ivanka Trump, arrived in Germany Tuesday.

Ivanka Trump's Berlin trip features a jam-packed day, including panel appearances and dinner with Merkel. This is her first international trip since her father assumed office. (The President has yet to travel abroad himself.)

With this trip, Trump, who was invited directly by Merkel, is indicating the importance of US-German relations, perhaps solidifying the country's fledgling relationship with the Trump administration after a rocky start.

Following an overnight transatlantic flight, Trump kicked off a whirlwind day at the US Embassy in Berlin, where she met with embassy staff and their families.

She then participated in a panel discussion on women's empowerment and entrepreneurship at the W-20, a summit of G-20 countries aimed at promoting women's workforce participation and equality.

Asked about her role in her father's administration -- and whether she represented her father, the American people or \"your business\" -- Trump acknowledged she was \"rather unfamiliar with his role ... as it is quite new to me.\"

\"I'm listening, I'm learning, I'm defining the ways in which I think I'll be able to have impact,\" said Trump, one of eight participants, including Merkel, Queen Màxima of the Netherlands, and International Monetary Fund director Christine Lagarde.

She was later asked if the President was an \"empowerer of women\" given some of his past comments. Ivanka Trump brushed aside any concerns. At one point, members of the audience hissed and booed when Trump began describing her father as an advocate for women.

\"I know from personal experience, and I think the thousands of women who have worked with and for my father for decades when he was in the private sector are a testament to his belief and solid conviction in the potential of women and their ability to do the job as well as any man,\" she replied.

Following the panel, Trump will tour Siemens Technik Akademie, where she will speak with program apprentices.

She will also pay her respects at the Memorial to the Murdered Jews of Europe, a large series of concrete rectangular slabs of various heights. Her husband, Jared Kushner, is the grandchild of Holocaust survivors. Trump converted to Judaism herself in 2009.

In the evening, Trump will join Merkel at a W-20 gala dinner.

The visit comes at a time when the Trump administration has not yet appointed a new ambassador to Germany, and there is no White House chief of protocol, an important diplomatic role. Chiefs of protocol hold the rank of ambassador and they accompany presidents on foreign trips and coordinate visits of foreign dignitaries to the US.

Trump's trip is one of the top news stories in Berlin, her face splashed across multiple front pages.

\"Ivanka Trump is the most favored child of the US President. She is his most important whisperer. Will she put her father on a moderate course, as many hope? Or will she be a loyal accomplice?\" a translation of the article said.

Her appearance in Berlin has drawn substantial interest from the media. The W-20 organizers approved more than 400 press credentials for the event -- most will be seated in a separate room during the panel itself.

The President spoke with Merkel by phone on the eve of his daughter's visit, his fourth call since their March meeting and their fifth call together since he took office in January, further cementing her status as one of his most important allies and perhaps signaling that they are working on their relationship.

Ivanka Trump first became close with Merkel during that initial March White House visit. They were seated together at a vocational education and workforce development panel. German officials soon asked Ivanka Trump to help organize a meeting between American and German business leaders on vocational training.

Ivanka Trump has increased her profile in recent weeks. She announced in late March that she would be taking a formal role in the administration amid ethics concerns, despite initially saying she would be simply playing the role of daughter. She has begun speaking publicly on behalf of the administration, her scheduled peppered with roundtable discussions and panels. Her first media interview came earlier this month, when she told CBS' Gayle King that she (hoped) to make a positive impact\" in her new role.

She has long been a key trusted adviser to her father, through her young adulthood to her time as executive vice president of real estate development and acquisition at the Trump Organization, and, ultimately, to his 2016 presidential campaign.

Trump has made women's economic empowerment a signature issue. She's participated in round table discussions on the topic at the White House and helped establish the United States Canada Council for the Advancement of Women Business Leaders and Female Entrepreneurs in February, along with her father and Canadian Prime Minister Justin Trudeau.

In a document obtained by CNN Monday, the White House counted \"helping women and minorities\" as a key accomplishment during the first 100 days, citing the Canada-US Council, an initiative for historically black colleges and universities, the \"Promoting Women in Entrepreneurship Act,\" and \"Women and Space Exploration\" as examples of success.

The first daughter's sphere of influence is unprecedented in American presidential history -- no immediate member of a first family had ever served in a formal capacity. She has begun to build her West Wing portfolio while her stepmother, first lady Melania Trump, has yet to live in Washington full time. (Melania Trump is expected to move to the White House with son Barron, 11, at the conclusion of the school year.)

In the CBS interview, Trump herself acknowledged that she was in a \"very unique and unprecedented situation.\"

It's not uncommon for first ladies to travel abroad solo, or for first daughters to travel, but this trip only reaffirms the uncharted territory.

Laura Bush took daughters Jenna and Barbara to Africa in 2007, and on other foreign trips when they were in the White House. Michelle Obama brought daughters Sasha and Malia to China in 2014.

\"This is the latest, and most striking, example of how much the Trump family is seeking to reframe the definition of what a first family is. Ivanka and Jared make Julie and David Eisenhower look like shy bystanders, when, in fact, they were very involved helping President Nixon during Watergate,\" said Kate Andersen Brower, a CNN contributor and author of \"First Women: The Grace and Power of America's Modern First Ladies.\"

She added: \"Ivanka Trump is clearly a major player in her father's White House and she seems unapologetic about it.\"