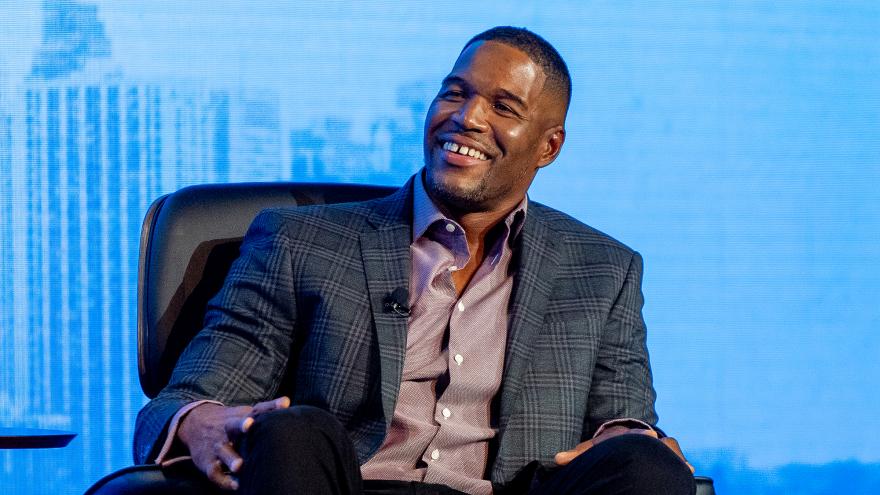 (CNN) -- Jeff Bezos' rocket company, Blue Origin, announced that it would be launching Good Morning America host Michael Strahan to the edge of space. Strahan will be joined by the daughter of the first American astronaut and four paying customers.

Liftoff is slated for 9:30 am CT on December 9 from Blue Origin launch facilities near the rural town of Van Horn, Texas.

Strahan and Laura Shepard Churchley, whose father Alan Shepard went on a suborbital flight in 1961 and later walked on the moon, will be joined by investors Dylan Taylor, Evan Dick, and Lane Bess, as well as Bess' adult child, Cameron Bess. Blue Origin said that Strahan and Shepard Churchley will be "honorary guests," much like the last celebrity Blue Origin sent to the edge of space, William Shatner, and have not paid for their tickets.

This flight will mark the first time that Blue Origin will fill all six seats on its New Shepard rocket and capsule. On the company's two previous flights — including the July flight that sent Bezos himself to space — only four of the seats were taken up.

That means the passengers will have a bit less wiggle room than prior customers, especially Strahan, who is six feet, five inches tall.

Strahan announced his plans to join the flight during a segment on Good Morning America Tuesday morning, noting that Blue Origin had him measured for his flight suit and had him test out one of the New Shepard capsule's seats to ensure he'd fit.

Strahan spent 15 season in the NFL, all of them with the New York Giants, where he won the Super Bowl with them in 2007. He was inducted into the Pro Football Hall of Fame in 2014.

The flight will follow a similar profile to Shatner's flight and Bezos before him, spending just 10 minutes off the ground.

Suborbital flights differ greatly from orbital flights of the type most of us think of when we think of spaceflight. Blue Origin's New Shepard flights will be brief, up-and-down trips, though they will go more than 62 miles above Earth, which is widely considered to be the edge of outer space.

Orbital rockets need to drum up enough power to hit at least 17,000 miles per hour, or what's known as orbital velocity, essentially giving a spacecraft enough energy to continue whipping around the Earth rather than being dragged immediately back down by gravity.

Suborbital flights require far less power and speed. That means less time the rocket is required to burn, lower temperatures scorching the outside of the spacecraft, less force and compression ripping at the spacecraft, and generally fewer opportunities for something to go very wrong.

New Shepard's suborbital fights hit about about three times the speed of sound — roughly 2,300 miles per hour — and fly directly upward until the rocket expends most of its fuel. The crew capsule will then separate from the rocket at the top of the trajectory and briefly continue upward before the capsule almost hovers at the top of its flight path, giving the passengers a few minutes of weightlessness.

The New Shepard capsule then deploys a large plume of parachutes to slow its descent to less than 20 miles per hour before it hits the ground.