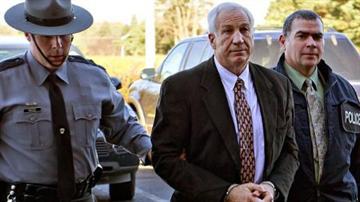 Former Penn State coach Jerry Sandusky's wife has denied allegations that her husband sexually abused boys in their home and that she ignored cries for help.

Sandusky was arrested Wednesday on 10 new counts of child sex abuse charges based on the testimony of two new alleged victims. The new allegations bring to 10 the number of alleged sex abuse victims.

Dottie Sandusky, who delivered a $50,000 check today to help bail her husband out of jail, was named in the testimony of one of the new alleged victims.

Mrs. Sandusky has been implicated in the alleged sex abuse crimes by three of the men who claim to have been assaulted by her husband.

The Pennsylvania attorney general's office, which is leading the investigation, would not confirm whether Dottie Sandusky was a target of their investigation or could face charges based on the testimony now available.

"I'll just say that it remains an ongoing investigation, driven by evidence and fact," said a spokesman for the department.

The accuser, known in the grand jury presentment as Victim 9, told a grand jury that while he was allegedly being raped in the basement of the couple's home once, he called out for her help, knowing Dottie Sandusky was upstairs. But she never came down to help him, he said.

"I have been shocked and dismayed by the allegations made against Jerry, particularly the most recent one that a now young man has said he was kept in our basement during visits and screamed for help as Jerry assaulted him while I was in our home and didn't respond to his cries for help," she said.

Jerry Sandusky, 67, is now charged with 50 counts relating to child molestation, and will appear in court for the first time to face his accusers on Tuesday. The preliminary hearing is expected to last several days.

"I continue to believe in Jerry's innocence and all the good things he has done," Mrs. Sandusky said today. "I am asking everyone to please be reasonable and open-minded until both sides of this case are heard, and Jerry has the opportunity to prove his innocence.

The new allegations match a pattern of behavior described by many of the first eight accusers who said that Sandusky sexually assaulted them in the basement of his home during sleepovers. Victim 1 told the grand jury that Sandusky would come down to tell the child it was time to go bed, and then crack his back, blow on his stomach, and eventually sexually assault him.

Victim 9, in the testimony released Wednesday, said that he was told by Sandusky to stay in the basement, where his wife rarely went, and to never go upstairs unless specifically told to do so. He claimed Sandusky brought him all of his meals to eat in the basement. The new accuser noted that there were empty bedrooms on the second floor of the residence, but he was never allowed to stay in them.

Dottie Sandusky flatly denied all of the accusations.

"No child who ever visited our home was ever forced to stay in our basement and fed there," she said. "All the kids who visited us ate with us and our kids and other guests when they were at our home."

Mrs. Sandusky said she is saddened at the accusations of abuse in her home.

"We don't know why these young men have made these false accusations, but we want everyone to know they are untrue," she said.

The attorney for Victim 4, Ben Andreozzi, said that his client would also have more specific information on Dottie Sandusky's alleged involvement in the sex abuse. Victim 4 is set to testify at the hearing beginning Tuesday.

Victim 7 may also implicate Mrs. Sandusky in his testimony during the hearing. In the grand jury presentment, the man testified that Dottie Sandusky tried to contact him in the weeks leading up to her husband's arrest, leaving him a voicemail saying it was "very important" that he call her back. He did not return the call.

CDC chief says there could be second, possibly worse coronavirus outbreak this winter