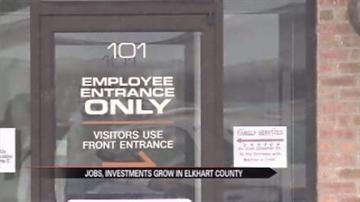 ELKHART COUNTY, Ind. — Elkhart County's 2012 numbers are in and they show a boost in jobs and investments. That is according to a new report from the Economic Development Corporation.

According to the report, there are about 1,000 new jobs coming to Elkhart County.

ABC57 asked county officials to find out whether people can afford to live on these jobs and how they balance out with the jobs the county lost last year.

"Coming out of the recession, we've been working hard to bring jobs back and we've been pretty successful," Kyle Hannon, CEO of the Elkhart Chamber of Commerce.

In 2012, more than 2,800 new jobs were created in Elkhart County. That is a stark contrast to the past five years.

"The 2,800 or so jobs that were added will be added over the next couple of years," said Elkhart County Councilman Mike Yoder. "We're tracking not only jobs added now and in the future but also jobs that showed up this year."

Twenty-three additional businesses are working with the Economic Development Corporation. Most are receiving a tax abatement as an incentive to add jobs.

"Most of those are we call Livable Wages—generally speaking," Yoder said. "I looked at the weighted average and I believe it's about $18 to $20 an hour."

But with the unemployment rates in Elkhart County hovering at nine percent, two percent higher than the national average, county officials are far from satisfied.

"it's not that we're going to rest. We've made these accomplishments and were proud of them," said Hannon. "But we're not going to spend too much time patting ourselves on the back because there's more work to do."

County officials said the the tax abatements are balanced out in the county budget through income taxes on the new jobs. Those new jobs are projected to compensate for the discounted property taxes.