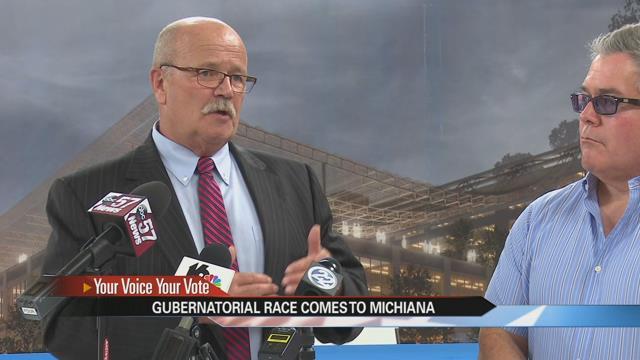 Indiana’s governor’s race made a stop in South Bend Wednesday.

GOP gubernatorial nominee Eric Holcomb was set to campaign at Fiddlers Hearth while his opponent, John Gregg met with the press after touring the city’s Studebaker plant.

When I look at this I see the end of so many of Indiana’s problems,” said Gregg.

The democratic candidate had high praise for South Bend and its plans for the former Studebaker plant, and soon-to-be tech hub.

“It tells me that we’ve advanced to it, we’re dealing with life sciences, and it’s going to help manufacturing,” said Gregg.

But his attention was also directed at his opponent.

“We are ahead in the polls, we have much higher name ID, our fundraising is much higher than my current opponent, emphasis on current, my attempt at a little humor,” said Gregg.

His humor was a jab at Holcomb for entering the race only after incumbent governor Mike Pence dropped out.

The LT. Governor was scheduled for a South Bend appearance but canceled due to the storms in Kokomo Wednesday.

He instead joined the governor at the emergency operations center in Indianapolis.