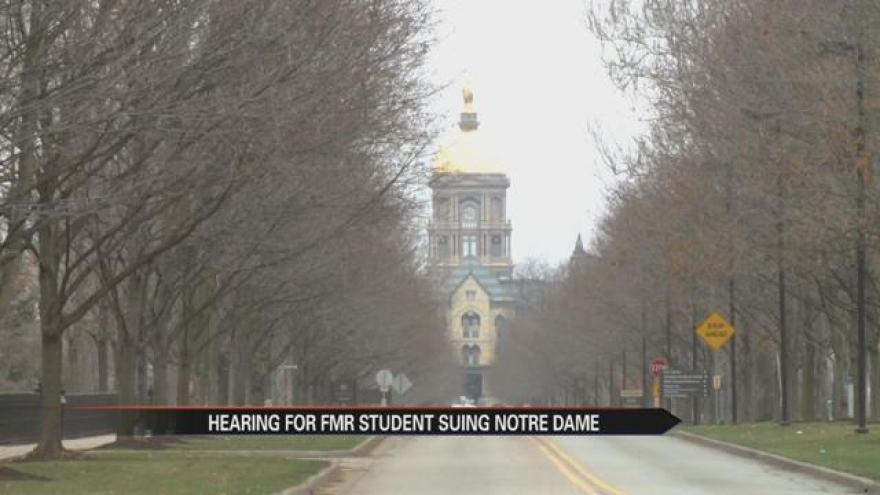 ABC 57 News has new updates in the legal battle between Notre Dame and a senior that they dismissed three weeks before graduation.

Attorneys for Notre Dame and the senior appeared for an initial hearing in a US District Courthouse in Lake County, Tuesday afternoon.

The case involves one student who alleges harassment, and her ex-boyfriend, the student filing suit, who claims he was seeking help for suicidal thoughts. A lawyer for the University opened  his statements with a strong criticism of the student, saying "I see a gentleman who has a fundamental problem with accepting responsibility for his actions."

Listed as John Doe in the court filings, that dismissed student is now suing the University, requesting that he be able to take his final two exams needed to earn his degree. In court Tuesday, the student's attorney noted that John Doe understands his degree might not be conferred right away, but his appeal aims to avoid the process of reapplying to the school in a year and re-taking his final semester.

As of Tuesday's hearing, however, the Judge says the case is too close to call without a further evidentiary hearing.

The case is the result of a the relationship between John Doe and his ex-girlfriend. According to the ex, John Doe was sending her suicidal texts to the point where she complained to the University. The school investigated and found he had committed four violations related to dating violence, so they expelled him just weeks before graduation.

John Doe claims that he was not treated fairly throughout the process, especially since he is classified as having a disability based on his suicidal thoughts - a claim the lawyer for Notre Dame said was unfounded, repeatedly stating that the school had "completed a robust investigation."

As the attorneys for both sides presented the story, the Judge raised some significant questions that he says need to be answered before he can make a ruling. He wants to know why the female student did not report the alleged harassment immediately and if there was any evidence of gender bias throughout the process.

John Doe says the core of the University's argument for his dismissal was based on a series of text messages his ex-girlfriend had submitted, but he claims those messages were incomplete. The Judge suggested that they subpoena her to request the full text transcriptions.

The Judge also recognized that time is of the essence, Tuesday, with graduation just a few weeks away. But this case could set a precedent, so he said that he wants to make sure he sees all of the evidence before making a decision.

The attorney for Notre Dame opened his statements with a strong criticism of the  student, saying "I see a gentleman who has s fundamental problem with accepting responsibility for his actions."