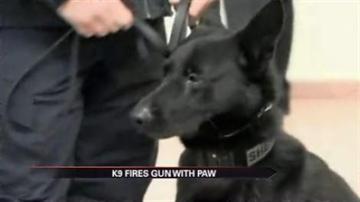 MASSACHUSETTS -- A Massachusetts family dodged a stray bullet that flew through their home all because of the strong paws of a police dog.

The K9 officer sniffed out a gun during an arrest and then pulled the trigger with its paw causing the gun to go off.

"I've been in this business a long time. I've seen a lot of K-9's locate weapons. This is the first time I've seen a case of where the gun discharged," said an officer.

"One in a million, I'm guessing. That's weird. But you never know. Things happen," said a resident of the home.

The bullet went through a nearby home where everyone inside was sleeping.