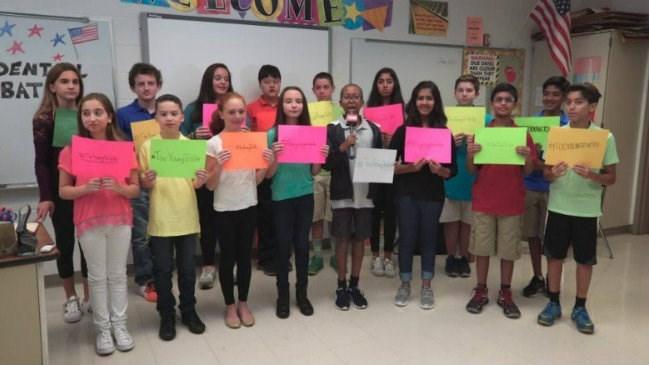 (CNN) -- A group of middle-schoolers in New Jersey, all members of their school's student council, were dismayed by the performances of both Donald Trump and Hillary Clinton in the first showdown of this most unusual presidential campaign.

Asked whether the presidential candidates "played nice" with each other in their highly anticipated first debate, none of the 16 students who gathered to talk with CNN on Tuesday raised their hands.

Trump, the Republican businessman, interrupted the Democratic politician way too often, said Emma Zwickel, an eighth-grader and a Trump supporter.

"Every time that Hillary said something that Donald Trump didn't agree with that was about him, Donald would be like, 'Wrong, wrong, wrong,' " said Emma, vice president of the student council at Robert R. Lazar Middle School in Montville, New Jersey. "Hillary at least wasn't interrupting him."

Riya Jain, a seventh-grader, said both candidates are not playing fair and should have considered their opponent's points and listened to what they were saying. "I think that they should listen to each other, because the main thing a president needs to have is listening skills and ideas and being open to different thoughts and opinions."

If she treated her siblings or friends the way she thinks the candidates treated each other at the debate, Riya said, she would be grounded for a week or maybe longer.

Mihir Tanguturi, a sixth-grader, said he would probably be punished too and wouldn't have the friendships he has today. "I definitely wouldn't have many friends at all, and they would know that I wasn't a very nice person."

Megha Rameshkumar, a seventh-grader who said she remains undecided, said Trump was being "rude" and not "really respectful" every time he interrupted Clinton.

Ian Hagen, an eighth-grader, said Trump kept speaking over his allotted time, and Ian didn't appreciate his personal approach with Clinton. "When they were handshaking, he put his hand behind Hillary, and that's just really rude."

Sarah Gorman, a sixth-grader and a Clinton supporter, said Trump wasn't focusing on the issues that were on the table and was instead often pointing fingers at his rival. "He was only talking about his business, and he was also blaming Hillary Clinton for a lot of things that were obviously not her fault."

Trump needs to "learn how to talk and be respectful," said Adyna Silverberg, a seventh-grader who said she favors Trump after watching the debate. "Hillary Clinton, she was very nice and respectful, but he just has to be more respectful."

But Trump wasn't the only candidate these sixth-, seventh- and eighth-graders took issue with during what is now the most-watched television debate in US history, with more than 81 million viewers tuning in. Clinton also didn't behave well, some of the students said.

"While Donald Trump was saying his speech and talking about what he feels (are) his issues, she was smiling and laughing," said Aaron Parisi, a sixth-grader who was undecided before the debate but said he now supports Trump.

"She just wasn't respecting his ideas the way she should have been. She was setting a bad example and basically laughing at what he was saying," said Aaron, the school's student council treasurer.

Louis Neri, a seventh-grader and Trump supporter, thought that Clinton was "being a little bit arrogant" and that Trump was the more respectful debater. He also took issue with moderator Lester Holt, anchor of "NBC Nightly News," saying he believed that some of the questioning was "biased," with too much of a focus on Trump and not enough on Clinton.

"They asked him about (his) business and all the bankruptcy and debt, and they should have focused on her email scandal ... and Benghazi," he said, referring to the deaths of four Americans at the consulate in Libya in 2012.

Elijah Dor, a sixth-grader, thought Holt did a fine job but Trump was the one being disrespectful. "I felt like Donald Trump was kind of attacking him when he was trying to ask the questions very nicely. It was just really, really rude," he said.

CNN invited members of the school's student council to do an interview Tuesday morning after the debate. The students, all under 18, may be #tooyoungtovote, but they're not too young to care about the issues. Invites by the school were sent to more than 30 students. Twenty-five volunteered to do the interview, and the first 16 students who signed up were selected.

Ten of the students thought Clinton behaved better during the debate, while seven thought Trump did. Overall, the students expressed real frustration with what they are seeing and hearing from the candidates.

Adit Terapanthi, a seventh-grader, said the debate was like a baseball game, with the two candidates constantly trying to score against each other. "It was like 'Tom & Jerry' ... fighting over every little thing. Donald Trump kept saying, 'Oh, ISIS formed because of Hillary,' and Hillary kept saying, 'Donald Trump didn't pay his federal taxes'. ... They didn't really propose how they're going stop ISIS or what they're going to do about taxes."

Jade Hieger, a seventh-grader, agreed. "The thing that makes me most frustrated is how they're treating each other like enemies, like they don't even respect each other, and they don't have any tolerance for each other when they're talking," she said. "And the fact that Donald Trump was speaking over Hillary and the fact that (she) was laughing at his ideas was a little frustrating as well."

Looking ahead to the next presidential debate, scheduled for October 9 at Washington University in St. Louis, these middle-schoolers -- and possible future political leaders themselves -- had plenty of advice for the candidates.

To Trump and Clinton, Michael Usatine, an eighth-grader who says he remains undecided, said he hopes to hear more substance in the next debate. "Instead of fighting over every question, maybe they should let the candidates speak and then tell what they want to do but propose a plan on stage."

Julia Demetropoulos, an eighth-grader who says she now supports Trump, said her candidate was "really rude" to Clinton and needs to change that in the next showdown. "I think he should treat her and other women better,' she said. "Definitely let her talk and don't cut people off."

Matthew Colatrella, a sixth-grader and a Trump supporter, agreed. "Maybe ... to be a little ... nicer."