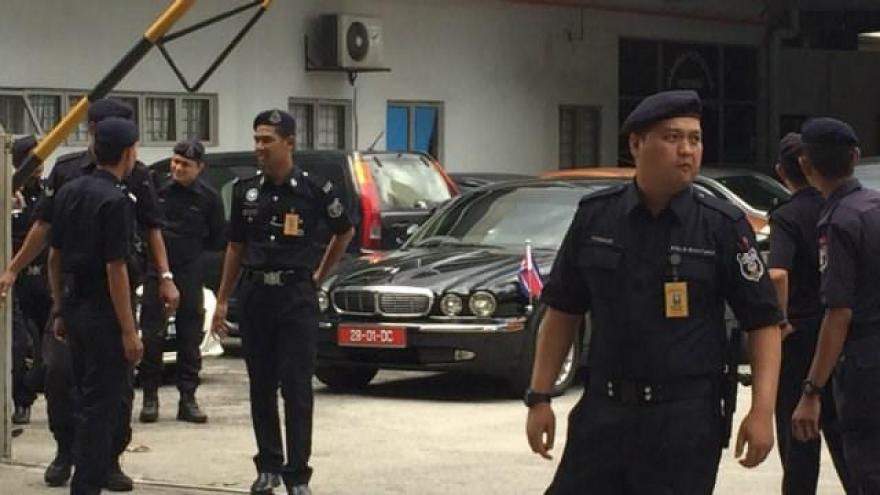 (CNN) -- Kim Jong Nam, the half-brother of North Korean leader Kim Jong Un, likely died within 20 minutes of being exposed to a nerve agent at the Kuala Lumpur International Airport in Malaysia.

His mysterious death occurred about 15 to 20 minutes after he was accosted and rubbed with the substance, Sathasivam said. His final moments would have been "painful," he said, adding that he fainted in a clinic and died in the ambulance during evacuation.

"Once we have identified the person, our job is done," the health minister said.

One of the two women who Malaysian authorities believe swiped Kim's face with the agent, Indonesian national Siti Aisyah, said she thought she was taking part in a prank and she believed the substance used was baby oil, said Andreano Erwin, Indonesia's deputy ambassador to Malaysia.

The VX nerve agent is an internationally banned substance that can kill within minutes.

Aisyah vomited in a taxi shortly after the incident, but denied reports she was showing any symptoms of VX contamination, a Malaysian official said.

Aisyah's aunt, who goes by the name Darmi, said her niece had been hired "to work as a comedian," pranking strangers by putting lotion and tomato sauce on them.

"It would be impossible for such a tiny person like her to do such a crime (as murder) if she was not manipulated," Darmi told CNN in Indonesia's Banten province.

Vietnamese officials met with Doan on Saturday, according to state-run news agency Viet Nam News. Embassy officials told the agency that Doan was in good health and thought she was participating in a prank show.

In addition to the two women detained, North Korean man Ri Jong Chol is also in custody, while Malaysian authorities have asked Interpol to put out an alert for four other North Korean suspects, who are thought to be back in Pyongyang.

An additional three North Koreans are wanted for questioning, including Hyon Kwang Song, second secretary at the North Korean Embassy in Malaysia, and Kim Uk Il, a staff member of North Korea's state-owned Air Koryo. Both are believed to still be in Malaysia.

Police in Kuala Lumpur raided a private apartment in the capital Thursday, police officials said, and are analyzing samples they collected from the apartment.

Aisyah's boyfriend, Muhammad Farid Bin Jalaluddin, was taken in for questioning and released on bond.