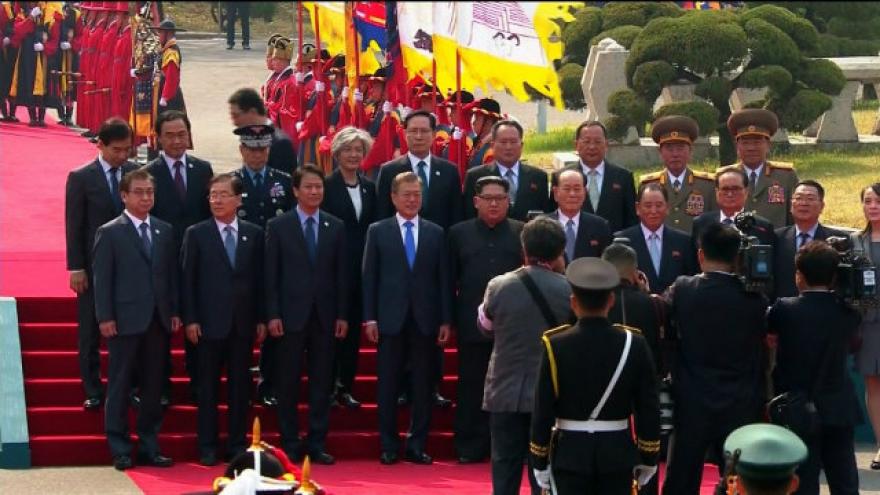 (CNN) -- With a single step, Kim Jong Un broke with decades of hostility and distrust to become the first North Korean leader to cross into South Korean territory since 1953.

It marked the beginning of a landmark summit, the first meeting of the leaders of North and South Korea in over a decade, with broad implications for the world.

Shaking hands with Moon Jae-in, while standing in the demilitarized zone (DMZ) dividing the two countries, Kim told the South Korean President he felt the weight of meeting at "such a historic location."

"It was a very courageous decision for you to come all the way here," Moon replied.

The highly-choreographed summit is the result of months of diplomatic talks between the North and the South and every moment has been laden with symbolism and history by organizers.

But in a rare unscripted moment right after their first meeting on the demarcation line, Kim invited Moon to step into the northern side of the DMZ. "Maybe this is the right time for you to enter North Korean territory," Kim said to Moon, who took him up on the invitation.

Kim received a full red-carpet welcoming ceremony, including a military band in traditional dress which played the Korean folk song "arirang," well known in both North and South Korea.

South Korean viewers in Seoul erupted at the warm greeting between Kim and Moon, with residents gathered around television screens across the city applauding and cheering.

"I didn't think I would be able to see such things happening in my life. I am happy to be witness to history in the making," local resident Kwak Eun-jung told CNN.

Kim and Moon have a full day of talks that are expected to focus on three subjects with worldwide implications -- the denuclearization of the Korean Peninsula, a peace settlement and the improvement of bilateral relations.

During the break for lunch, South Korean government spokesman Yoon Young-chan told reporters the two leaders had discussed denuclearization and a permanent peace agreement during the morning session.

The grand ceremony of the day began early in the Koreas when Moon's motorcade left Seoul for the DMZ, tracked the entire way by helicopters live-broadcasting the journey.

Crowds of supporters, holding signs calling for denuclearization, waved off the South Korean President as he set off on the hour-long drive north.

After meeting and stepping over the demarcation line separating the countries, they convened around a specially-designed table on the second floor of the Peace House.

To the left of Kim, sat his sister Kim Yo Jong, who led the Pyongyang delegation to the 2018 Pyeongchang Olympics and has been playing a more visible role in North Korean politics.

'Why was it so difficult to get here?'

"As I walked over here, I thought 'why was it so difficult to get here?' The separating line wasn't even that high to cross. It was too easy to walk over that line and it took us 11 years to get here," Kim told Moon and the gathered officials.

Writing in a visitor's book upon entering the Peace House, where negotiations are taking place, Kim wrote "a new history begins now" and "an age of peace, at the starting point of history."

Moon praised Kim's "courageous and bold decision" to sit down for talks during their morning meeting. "Over the past seven decades we weren't able to communicate, so I think we can talk the whole day today", Moon said, drawing laughs from Kim.

The summit is the result of lengthy and determined negotiating on the part of Moon, a longtime advocate of peace between the Koreas. It will also set the stage for the first meeting between a sitting US president and North Korean leader when Donald Trump and Kim meet in late May or June.

In a White House statement issued on Friday morning, the Trump administration said it hoped the talks "will achieve progress toward a future of peace and prosperity for the entire Korean Peninsula."

The pair ended the first session of talks at about midday local time, with Kim Jong Un returning to the North side of the border to eat lunch, driven in a limousine surrounded by a dozen security guards. In the evening, the two leaders' wives will join them for the dinner.

The meeting has been highly anticipated in South Korea as a possible opportunity to discuss a peace treaty between the two countries.

Although hostilities for the Korean War finished in 1953, with the signing of the armistice, no official agreement ending the war was ever signed.

Huge banners have been displayed across the South Korean capital of Seoul proclaiming "Peace, a new start" amid speculation the two leaders could discuss signing an official peace treaty finally ending the Korean War.

The North Korean leader would "open-heartedly discuss" all the issues with Moon, and was entering talks with the hope of "achieving peace prosperity and reunification of the Korean Peninsula," North Korean state media KCNA said.

However, stakes are high and some observers are doubtful the two sides can bridge the gap created by more than 60 years of antagonism and suspicion.

Just last year, Kim was an international pariah, denounced for his weapons tests and dire human rights record, including what the US and South Korea say was the murder of his own half brother in Kim Jong Nam, Malaysia.

In the past three months, the North Korean leader has gone to great lengths to cultivate an affable and diplomatic image, making his first trip abroad to Beijing last month and just this week was photographed comforting the Chinese victims of a bus crash.

But experts said the outcome of the summit in the long term will depend on how willing Kim is to stick to its agreements. Observers have warned that the regime has a track record of extracting concessions without giving much in return, in order to ensure the survival of the Kim family dynasty.

"The success of this summit will not be known today but will depend on the reactions from Washington and Pyongyang over the coming days and weeks. North Korean cheating and US ambivalence has caused the collapse of all previous openings," Adam Mount, senior fellow at the Federation of American Scientists, told CNN.

Officials across the world, especially in the United States, will be paying close attention to any specific agreements by Kim relating to his nuclear arsenal.

Japan's Defense Minister Itsunori Onodera said the North Koreans needed to make clear commitments on its nuclear and missile programs. "I would like to keep close eyes on ... this summit and find out if it is leading to concrete action," he said on Friday morning.

Less than a week ago, North Korea announced it had suspended its nuclear and weapons testing programs, which it proclaimed were "complete."

But while Kim has in recent weeks publicly endorsed denuclearization, what exactly he means by the term and how it would take place has been left extremely vague.