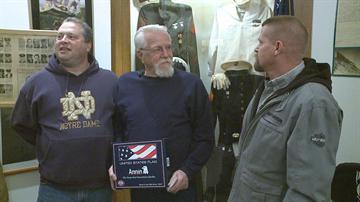 BUCHANAN, Mich. – A Korean War veteran, who survived some of the worst fighting of the war that cost over 30,000 American lives, was surprised on Thursday night when his family and members of Buchanan’s American Legion post presented him with medals he had earned but never received.

Lewis Kenneth Voss was 21-years-old and living in South Bend when he was drafted into the army in 1952 after unsuccessfully trying to enlist two times.

“I had bad eyes, but then when they drafted me I had 20/20 vision,” Voss joked.  “Went through basic training, got a seven-day leave, went back and went to Frisco, got on a ship, went to Japan and from Japan to Korea.”

Voss served in the 424th Field Artillery Battalion, a unit which saw some of the worst artillery battles of the war.

“I was in battle for about 14-months in a combat zone,” Voss described.

Was served in Korea from 1952 to 1954 and was never wounded.  When the time came for him to come home he left without receiving the medals he’d earned.

Voss returned home and started working in construction and raising his ten children.  Two of his sons, Darryl Voss and Scott Nikodem, started working to get their father his medals over a month ago.  They said Voss rarely spoke of his service in the Korean War.

“He always told us he was injured in the war and that his belly button was his bullet hole,” Scott Nikodem described laughing.

But, with the help of the American Legion and Indiana Congressman Joe Donnelly, Voss was able to receive his honors.

“He’s very deserving, Dad’s been a great inspiration through our whole lives,” Nikodem described.  “We love him, we’re very, very proud of him.”

The National Defense Service, the Korean Service and the United Nations Service Medals he’d earned were handed over to Voss in a surprise ceremony at the Buchanan’s American Legion Post.

Voss and his family explained that he still has other long overdue medals on the way.