Kushner confirms Russia meetings, says 'all of my actions were proper' 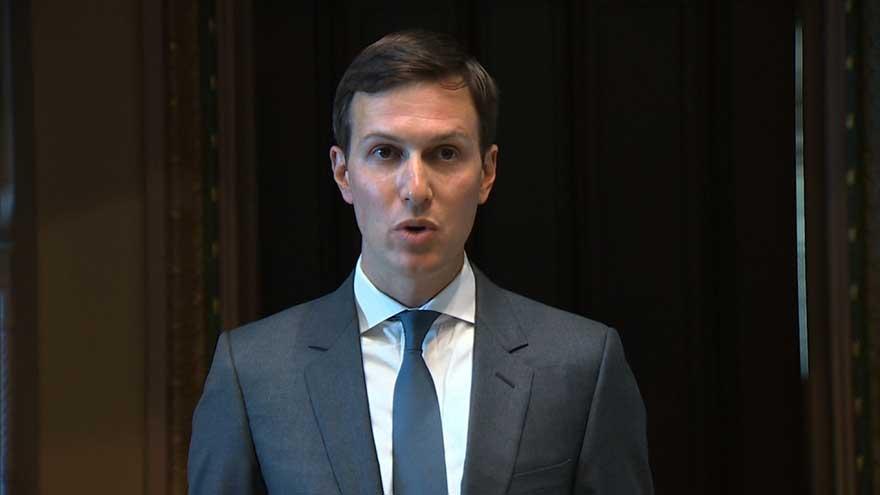 By Jeremy Diamond and Pamela Brown

(CNN) -- Jared Kushner, the President's son-in-law and senior adviser, made a rare public statement Monday following his meeting with Senate intelligence committee staffers, saying his answers and information he provided the committee show "all of my actions were proper" in the course of the campaign.

Standing behind a White House logo outside the West Wing, he said "I did not collude with Russia," adding "I do not know of anyone else" on the campaign who did so.

His comments outside the White House were similar to an 11-page statement released ahead of his closed-door interview with Senate intelligence committee staff. In that document, Kushner offered his first public accounting of what he says are his four meetings with Russians during the 2016 campaign and transition, offering previously undisclosed details of those meetings. The statement comes as federal and congressional investigators are scrutinizing Kushner's contacts with Russians as part of their probes into Russian meddling in the 2016 election.

Kushner repeatedly makes the case in the document that he discussed nothing improper during those meetings, which include two encounters with the Russian ambassador in Washington, a meeting with the head of a Russian state-owned bank and the June 2016 meeting with a Russian lawyer and others that was set up by Kushner's brother-in-law, Donald Trump Jr.

"I did not collude, nor know of anyone else in the campaign who colluded, with any foreign government," Kushner says in the statement. "I had no improper contacts. I have not relied on Russian funds to finance my business activities in the private sector. I have tried to be fully transparent with regard to the filing of my SF-86 form, above and beyond what is required. Hopefully, this puts these matters to rest."

Kushner disputes a Reuters report claiming he had two phone calls between April and November 2016 with the Russian ambassador at the time, Sergey Kislyak, explaining that he has no recollection of those calls and a "comprehensive review of my land line and cell phone records from the time does not reveal those calls."

Kushner also seeks to distance himself from the June 2016 meeting at Trump Tower that has become a part of special counsel Robert Mueller's investigation, saying he had no prior knowledge of the topic and did not read Trump Jr.'s full email asking him to join the session.

"That email was on top of a long back and forth that I did not read at the time," Kushner said in the statement. "As I did with most emails when I was working remotely, I quickly reviewed on my iPhone the relevant message that the meeting would occur at 4:00 PM at his office."

The bulk of the email revealed that Trump Jr. believed the Russian government would provide him with damaging information about Hillary Clinton during the meeting.

The meeting's participants said the meeting instead focused on Russian adoptions, and Kushner says in his statement that he emailed his assistant about 10 minutes after he walked into the room.

"Can u pls call me on my cell? Need excuse to get out of meeting," Kushner wrote to his assistant in an email provided to the committees alongside the statement. He quoted the emails in his statement but did not disclose them to the media.

The previously undisclosed detail is just one of several that Kushner reveals in the letter in an effort to clear himself of any suspicions stemming from the congressional and federal investigations into contacts between Trump campaign officials and Russia.

The June 2016 meeting set up by Trump Jr., which was only publicly revealed for the first time this month, has become a target of scrutiny in those investigations after emails revealed that Trump Jr. believed he would obtain damaging information about Hillary Clinton from the Russian government.

President Donald Trump has repeatedly decried the investigations as a "witch hunt," but the June 2016 meeting and surrounding emails offered the most concrete evidence that Trump campaign officials were open to collaborating with the Russian government.

Kushner also addresses the controversy over his SF-86 form -- the questionnaire needed to obtain a security clearance -- explaining that it was prematurely submitted in error by his assistant, who believed the forms were complete.

"People at my New York office were helping me find the information, organize it, review it and put it into the electronic form. They sent an email to my assistant in Washington, communicating that the changes to one particular section were complete; my assistant interpreted that message as meaning that the entire form was completed," Kushner writes, noting that the form was a "rough draft" at the time. "Because of this miscommunication, my assistant submitted the draft on January 18, 2017."

Kushner says he and his team realized that evening the form was submitted prematurely and the next day, they provided an update to the transition noting that Kushner had "numerous contacts with foreign officials" and would soon provide a full accounting of those contacts.

He would subsequently update the SF-86 form two more times. In the next update, he provided a list of more than 100 contacts with foreign officials, but left off the June 2016 Trump Tower meeting.

Kushner said he later became aware of that update amid a review of his records, and his attorneys provided another update to his SF-86 form last month.

Kushner also provided his first accounting of what he said were his only two meetings with Kislyak, the Russian ambassador at the time, during the campaign and transition, and says that neither encounter included a discussion of US-imposed sanctions. Kislyak completed his service as ambassador and returned to Russia over the weekend.

Kushner described his first encounter with Kislyak during the campaign as brief, with little more than "pleasantries exchanged."

He then met with Kislyak during the transition, at which point the then-Russian ambassador offered to provide transition officials with Russian military information on the conflict in Syria.

That meeting was the subject of reports claiming that Kushner and Kislyak had sought to establish a secret backchannel between the two countries, which Kushner denies.

But Kushner does confirm that he sought to receive the Syria briefing from Russian generals at the Russian embassy in Washington because the transition office was not equipped with secure lines. But Kislyak said "that would not be possible," Kushner explains.

Kushner also offers his first on-the-record account of his meeting with Sergey Gorkov, the head of the Russian state-owned VneshEconomBank, or VEB, whom Kushner says he met with at Kislyak's behest.

Kushner disputes VEB's account of the meeting. He says he met with Gorkov in his capacity as a transition official because of Gorkov's close relationship with Russian President Vladimir Putin. VEB, which has been under US sanctions since July 2014, has claimed the interaction was a business meeting set up due to Kushner's role as a prominent New York real estate developer.

Now a senior adviser to the President, Kushner discloses that he received two gifts from Gorkov and said he asked his assistant to register them with the transition at the time: "One was a piece of art from Nvgorod, the village where my grandparents were from in Belarus, and the other was a bag of dirt from that same village."