La Niña arrives in the Pacific, will impact winter weather 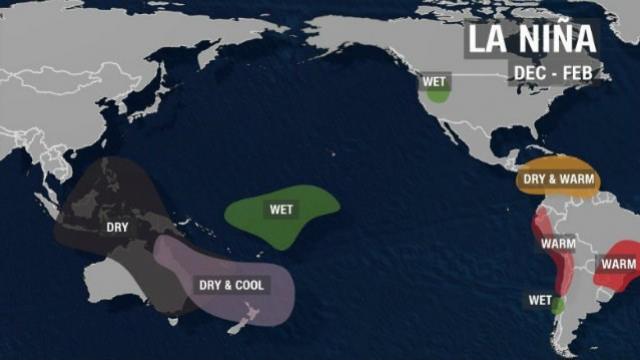 (CNN) -- The long awaited La Niña, which was first predicted by the Climate Prediction Center (CPC) back in April, has finally arrived in the Pacific Ocean, NOAA announced Thursday -- and it's expected to stick around through the winter.

La Niña conditions, which are characterized by below-normal sea surface temperatures in the tropical Pacific, were observed during October and have persisted into November -- prompting the CPC to raise the ENSO Alert System from a La Niña Watch to a La Niña Advisory.

La Niña, much like its warmer counterpart, El Niño, have far reaching global impacts extending beyond the Pacific Ocean.

For the United States, NOAA forecasters say the current La Niña will "likely contribute to drier and warmer weather in the southern US and wetter, cooler conditions in the Pacific Northwest and across to the northern tier of the nation this winter."

This is bad news for the southeast, which is currently seeing an expanding and worsening drought. Following an autumn that had well above-average temperatures and scant rainfall has left more than 20% of the region in an Extreme or Exceptional Drought, the two highest designations in the US Drought Monitor.

La Niña "is likely to contribute to persisting or developing drought across much of the southern U.S. this winter," said Mike Halpert, deputy director of the Climate Prediction Center.

Fortunately, the current La Niña is weak and is expected to stay that way through the winter. This should keep the impact from being as severe as what was seen globally with 2015's record-setting El Niño, which saw deadly drought in Asia and helped make it the hottest year on record.

La Niña generally tends to lower global temperatures as it cools the surface of the tropical Pacific Ocean.

It will be interesting to see if this La Niña can slow down the rapidly rising global temperatures and prevent 2016 from outpacing 2015 and becoming the third consecutive hottest year for the planet.