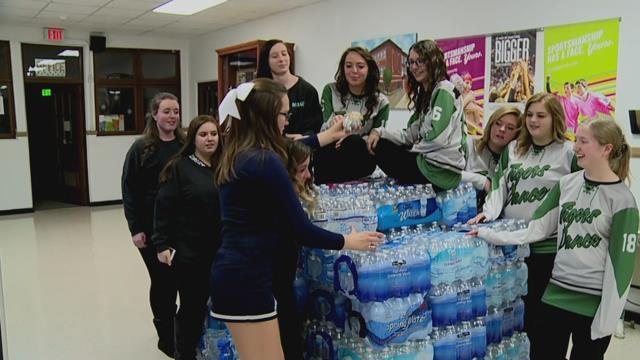 In La Porte County - a rivalry refreshed. Two teams battling on the court, but fighting another foe together on the same night.

"Indiana is famous for basketball," says Michael Kellems, Captain of the La Porte County Sheriff's Office. "Small town basketball is even more popular I think than anything else. And i think the rivalry that exists between the south central and lacrosse tigers is unlike any other I've ever seen."

'Yeah its a big rivalry between lacrosse and south central - it always has been. And this time we have a little extra going on.

Extra. As if this rivalry needs fuel to the fire. But this time, the schools and communities coming together to help battle another problem with a unique joint project.

"Project H20," Somers says. "And so people have been coming in and donating cases of water to be sent out to flint, Michigan."

And how did the idea start?

"The Lacrosse Tigers were hosting the game tonight and they opened it up to their community." Captain Kellems goes on to say that "they contacted south central folks too and said Hey - if you want to bring a case of water down here - even though its our rivalry game - bring it on down and we'll let you in the game for free.'

And the support, as you can imagine, has been nothing short of championship quality.

Scott Lanoue is a resource officer at South Central. "Tonight we've got close to 150 - maybe a little over. The sheriffs department has jumped on board with us too. They've got a competition going between each shift. They've got over 200 cases at the sheriffs dept. Collected in just over 48 hours since we started this."

Not only for flint - but a good thing for the rivalry.

Principal Somers says "We participated in something called Rachel's Challenge this last fall with the two schools. Acts of kindness are prevalent in that. That's something we're trying to promote with our kids, between our two schools and that's been a great experience for us also."

For one night - two teams. One rivalry. One goal. To help a city and its people  - rebound.