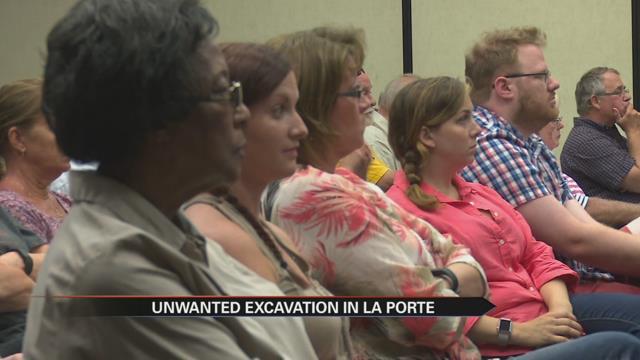 There was yet another heated planning commission meeting in La Porte Tuesday night as the fight for a county neighborhood continues.

Residents are still at odds with D&M Excavating Company for digging in their area.

Frustrations came to a head as the planning commission had to decide whether or not their claims were legitimate.

Legal counsel for the company says his client’s work in building a pond has been met with negative and even harassing responses from members of the community.

But residents say the company is exploiting a special use permit to operate a business out of their backyards.

Originally, the company petitioned to dig for two years in the neighborhood so long as a four-acre pond was being constructed.

But neighbors believe that was a facade and say the company was mining sand from their neighborhood and using it to supply a city contract.

“This is in a residential neighborhood where this action is not permitted, it’s not in the joint zoning ordinance,” said neighbor Pat Meaney.

The planning commission met to discuss the merit of that permit.

Initially, they voted to remove the red tape on that property and included a one year review, essentially Tuesday’s meeting.

Seeing as the permit was over a two year span, the board voted to take no action after finding evidence that suggested a pond is being built.

“Mr. Miller [the petitioner] is doing what he said he was going to do. He’s got about ¾ of an acre left to go which is about 10 percent of the project space and he’s moving forward,” said County Commissioner Mike Bohacek.